The Iloilo provincial capitol announced on Tuesday, September 7, a temporary shutdown of services after 15 personnel tested positive for COVID-19.

On the other side of Western Visayas, Negros Occidental provincial officials were eyeing levels of lockdown of two hospitals after a doctor and a nurse tested positive for COVID-19.

A doctor from the Teresita Jalandoni Provincial Hospital in Silay City was taken from an isolation center to the Corazon Locsin Montelibano Memorial Hospital because of worsening symptoms, the province’s COVID-19 task force announced. A nurse from a different hospital was already recovering.

The Don Jose S. Monfort Medical Center Extension Hospital in Barotac Nuevo, Iloilo, also temporarily suspended elective surgeries until September 13 to conduct contact tracing and disinfection. It did not give any figures for infected staff.

In Iloilo City, Mayor Jerry Treñas said three priests, a cook, and a secretary of a church in La Paz district had also tested positive for the virus.

The mayor did not give details but Aksyon Radyo Iloilo said 31 personnel of the church are under quarantine.

Treñas on Tuesday added seven more barangays to the local granular lockdown list, bringing to 36 the number of areas where egress and ingress – except by health officials – will be banned for 72 hours.

Areas are placed under granular lockdown if there are two or more COVID-19 cases. The mayor assured communities that affected households would receive food and other aid. The lockdown involves mandatory reverse transcription-polymerase chain reaction (RT-PCR) tests of close contacts and contact tracing for second tier contacts.

“Our cases keep rising so please stay at home and get yourselves vaccinated,” the mayor urged. 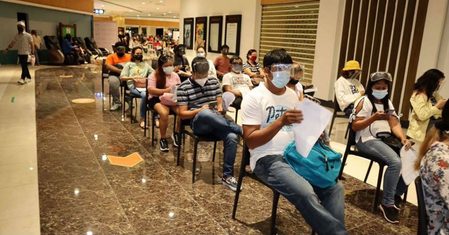 Lacson said the most affected cities in the province are Bago, just south of Bacolod, E.B. Magalona in the province’s middle northern part, and San Carlos City in the far north.

Treñas announced free RT-PCR tests at the city’s Jubilee Hall for all symptomatic patients and their contacts, returning overseas Filipinos, and returning residents.

He also asked the city council to put a P1,800 cap on the price of RT-PCR tests to help businesses that need to continuously test employees.

The mayor said residents need a doctor’s referral to get free tests.

“Those who will undergo a swab test for travel or employment purposes will be charged with the current rate of P2,500 pending the amendment in the ordinance,” Treñas said.

Bacolod City Administrator Em Ang reported the launch of the city’s fourth vaccination bus and a return to workplace inoculation, saying it would help speed up goals to achieve herd immunity. – Rappler.com