'MAIBA NAMAN.' Isko Moreno gestures to his audience during his campaign kick-off in Manila. Rappler

MANILA, Philippines – Isko Moreno is a man in a hurry, and proud of it.

On the first day of the campaign period for the 2022 Philippine elections, the 47-year-old Manila Mayor and presidential candidate Isko Moreno put his own spin to the common criticism lobbed at him for being in a rush to be chief executive.

At his proclamation rally on Tuesday, February 8, Moreno said the country had experienced 21 years of Marcos rule and 18 years with the Aquinos or Liberal Party in power – a combination of the two Aquino presidencies and six years of LP’s Leni Robredo as Vice President. 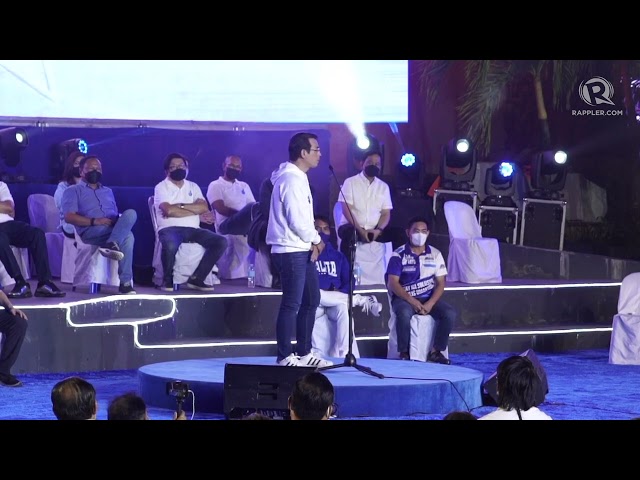 (It’s true what they are saying. They can say we are in a hurry. And we should be. We’ve been waiting 39 years.)

He portrayed his two most formidable rivals, Ferdinand Marcos Jr. and Robredo, as embodiments of elitist politics that has excluded alternative candidates like him who rose from poverty despite initially lacking political connections, and offered himself as the alternative. (READ: Isko says Filipinos shouldn’t vote for Marcos, Robredo: ‘Maghihigantihan sila’)

(If you’re tired of them both, I’m here. Try something different. Anyway, you bet on them for 39 years. Maybe it’s not too much to ask for you to bet on me for just six years?) Projecting youth and energy, Moreno donned a white sweatshirt emblazoned with his name, jeans, and his usual Adidas Superstar sneakers. His youth has also been a subject of criticism.

The man to address inequality?

Moreno glowed onstage with his matinee good looks but spoke the rough language of the streets as he described the dehumanizing experience of the impoverished, taking from his own past as a Tondo shanty-dweller and garbage collector. 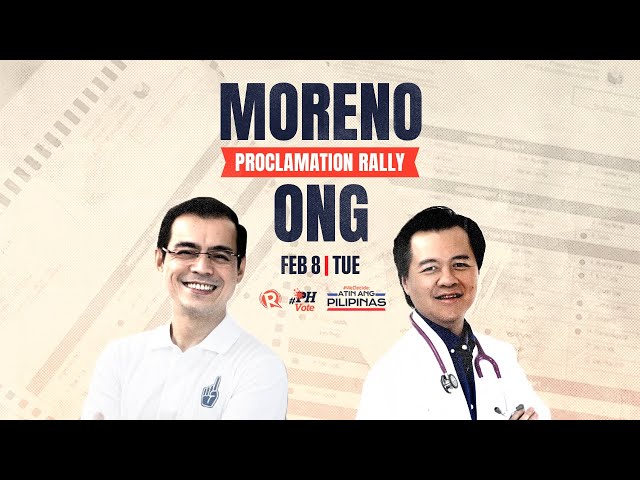 In one memorable part of his speech, he spoke in great detail about what it’s like to eat food one fishes out of trash.

(When you eat the leftovers of someone else’s meal that you had to dig up from the garbage, a mixture of Coke, Royal, Sprite, and spaghetti-palabok, tissue, tin, straw, spoon, fork, and styrofoam because you have no choice. Because your only choice is to die with your eyes open or die with hepatitis.)

He then used his past as a street boy to preface his argument that he, out of his rivals, is the best person to solve inequality.

(The poor go through so many hardships – psychological, emotional, [economic]. That’s why people in government should hurry up, we should be rushing to find a solution and we should always act with great speed.)

Moreno held in thrall his audience of mostly supporters from Manila and Luzon, but with groups from as far as Iloilo, Marawi, and Zamboanga.

Eschewing a thunderous voice in favor of a measured delivery, Moreno nevertheless pulled emotional punches when speaking of the “pain” of poverty and when asking the crowd how they’ve fared after decades of rule by the same political clans (many enthusiastically responded with “Nganga!” or “Nothing!”).

Moreno deliberately left out any mentions of his platform or of technical policy issues, choosing to go for the gut and tug at heartstrings.

Before his speech, political allies took turns giving glowing testimonials about Moreno – mostly citing his achievements as Manila mayor, including his pandemic response and infrastructure projects.

(Words won’t do the action. It will be actions that will speak. It is his actions that speak for Isko Moreno.)

Among the crowd, Maranao Drieza Lininding of the Moro Consensus Group, told Rappler he decided to support Moreno because he liked the mayor’s plans for Marawi, his hometown which has not yet fully recovered from the 2017 terrorist siege.

Lininding has been an outspoken critic of the Duterte administration’s rehabilitation program for the city. Before Moreno’s proclamation rally, he and other candidates of his party Aksyon Demokratiko, went on a motorcade around Manila that lasted six hours because of a large turnout of people on the streets, vehicular traffic, and the city’s narrow thoroughfares.

The Manila mayor, known to be religious, began the day with a Mass at Tondo Church, parish of his childhood. He ended his rally with a finger pointed to the sky and heartfelt delivery of his personal slogan, “God first!” – Rappler.com