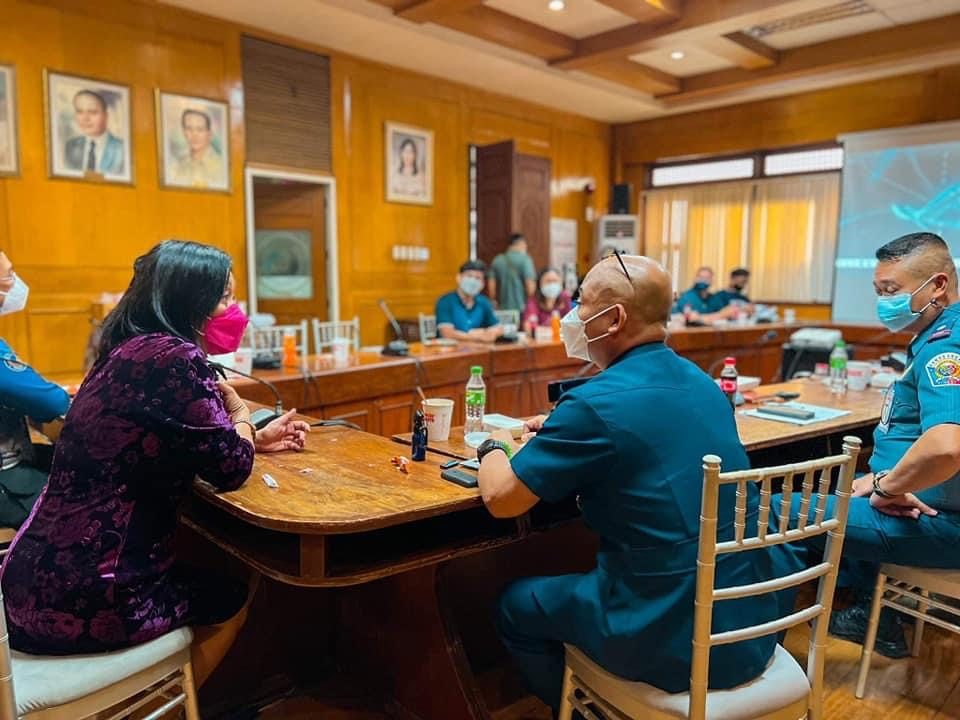 PREPARATION. Zamboanga Mayor Maria Isabelle Climaco meets with police officials to finalize security preparations for the Bar examinations in the city. Zamboanga is one of the five cities in Mindanao where the most difficult licensure test would be given this year.

Facebook Twitter Copy URL
Copied
In a way, passing the COVID-19 test first has become a requirement for one to become a lawyer under the new normal. Without a medical certification, one cannot be an examinee.

CAGAYAN DE ORO, Philippines – In a small apartment on Don Apolinar Velez Street, right smack in the middle of downtown Cagayan de Oro, are three young ladies who went on group isolation immediately after New Year’s Day while reviewing for the Bar Examinations. After several postponements and a two-year delay, catching COVID-19 was the last thing they wanted.

Had it not been for the pandemic, they would have taken the Bar in 2020.

The exams were moved to the first quarter of 2021 and again, to November of the same year. Then it was postponed again to January 2022 but a surge in the number of COVID-19 cases after Yuletide, aggravated by the Typhoon Odette (Rai) devastation in many parts of the Visayas and Mindanao, forced the Supreme Court (SC) to schedule it this week.

The three are among the hundreds of law graduates throughout Northern Mindanao who would take the most difficult licensure examinations in the country. Nationwide, the Supreme Court (SC) expects 11,790 Bar examinees this year.

Their sacrifice paid off – they just concluded their group review on isolation and tested negative for the virus, and are ready to take the examinations on Friday, February 4, and Sunday, February 6.

But two of their batchmates were not as lucky. After two years of waiting and preparations, they found themselves breaking into tears – they just lost the chance to become lawyers this year all because they tested positive for COVID-19 on Wednesday, February 2, two days before the exams. There could be more.

In a way, passing the COVID-19 test first has become a requirement for one to become a lawyer under the new normal. Without a medical certification, one cannot be an examinee.

If it’s any consolation, the decentralization of this year’s Bar examinations allows examinees to take the test closer to home.

It would have reduced their expenses had it not been for the two-year delay. For many, that meant spending more for longer reviews and in the case of some, renting apartments so they could go on isolation away from their COVID-19-vulnerable family members.

The three law graduates would take the Bar exams at Xavier University-Ateneo de Cagayan, their alma mater, one of two Cagayan de Oro schools that would serve as Bar examination centers in Mindanao. The other is Liceo de Cagayan University.

There are four other Mindanao cities where the simultaneous exams would be given: Davao, General Santos, Iligan, and Zamboanga.

The SC has reduced the number of days of the examinations from four to two, and the coverage “to meet the demand for new lawyers amid the disasters plaguing the country.”

The country has not produced any lawyer since the pandemic and for the first time, the exams will be digital instead of handwritten, and taken in various cities across the country. The local Roads and Traffic Administration (RTA) would close the roads around the examination centers, and the police would secure their perimeters.

“We’re not allowed to go inside and so, our operations will be made outside the examination centers,” Samong said.

Similar preparations have been made in other Mindanao cities where the Bar examinations would take place.

In Zamboanga City, the military and police would be deployed outside the Ateneo de Zamboanga University on Friday and Sunday, according to Mayor Maria Isabelle Climaco.

Cimaco said local officials met with the police and military this week to ensure that everything would go smoothly especially because “this is the first time that the Bar exams will be held in the city.”

City administrator Michael Saavedra said the Zamboanga City Police Office has assured that it would deploy enough officers to secure the area and help in managing the vehicular traffic flow given Mayor Climaco’s order to close roads near the ADZU to the public. The roads in Climaco’s executive order cover a commercial area in downtown Zamboanga.

In Soccsksargen, the same security preparations were made for the state-run Mindanao State University-General Santos City Fatima Campus that will serve as the lone Bar examinations center in the region. –with reports from Rommel Robollido/Rappler.com