James Deakin under fire for photo, video with Bongbong Marcos 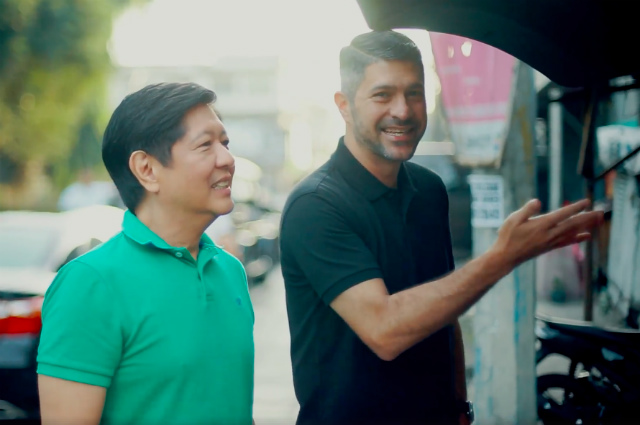 Deakin and Marcos also discussed Metro Manila's traffic problem in a 12-minute video. It is the second in a series of video blogs (vlogs) posted on the official Facebook page of the defeated vice presidential candidate.

Netizens said Deakin should have known better than to associate himself with the son of the late dictator Ferdinand Marcos who placed the Philippines under Martial Law from 1971 to 1983.

In a country where people are still seeking justice for the atrocities of the Marcoses, the least that James Deakin can do is refuse to share a ride with the unrepentant son of the dictator. — Emman Hizon (@EmmanHizon) January 21, 2018 James Deakin. Thinks it’s okay to be anti-poor but refuses to take a stance on Bongbong Marcos. This basically means he’s too scared to actually confront anyone in power — Lakan (@immanuellakant) January 21, 2018 Isnt Sen. Grace Poe the one working closely on MRT issues. Sen JV Ejercito heads the Urban Planning Committee. Heck public works committee is Pacquiao. Local Govt is Sen Angara. Is BBM heading tranportation? Why him #JamesDeakin just cause? — Harmond Marte (@harmondmarte) January 21, 2018 I learned a new word that expressed disappointment. “James Deakin is cancelledt” https://t.co/Pjqgss0s6q — Noemi L. Dado (@momblogger) January 21, 2018 Ano'ng kinalaman/credential ni BBM pagdating sa transpo policy at traffic? James Deakin gave a platform to a scion of a dynasty that plundered the country for decades. "Objective journalism" doesn't mean existing in a vacuum, doesn't mean being blind political reality. — Jay Garcia (@bebemomoy) January 21, 2018

In response to critics, Deakin said he is neither a "BBM defender" nor a "BBM detractor" but "a transport journalist and road safety advocate [who] is passionate about finding solutions to this traffic crisis we are all going through."

"It is just one of the thousands of recorded conversations I've had with lawmakers, politicians, and other government officials through the course of my career," he added in a statement posted on Facebook. "It is what I do."

Deakin also said talking to all sorts of people is part of being "an objective journalist."

"[It] requires having conversations and interviews with a whole range of people. Not just people [who] I like or who agree with me," he added. "And that is the very least you should expect from an objective journalist."

But Deakin's explanation did not sit well with some.

"Please don't portray yourself as a victim of hate. Please lang. Konting perspective naman. Maraming buhay ang sinira ng BFF mong si BBM at ang pamilya niya (Please. Just a little perspective. A lot of lives were destroyed by BBM and his family). The Marcoses destroyed Toyota. They plundered the economy. Why do PR for BBM wittingly or unwittingly?" columnist Tonyo Cruz said on Twitter.

"[We] expect better from a journalist who benefits from freedoms restored by the anti-Marcos struggle," he added.

James Deakin, please don’t portray yourself as a victim of hate. Please lang. Konting perspective naman. Maraming buhay ang sinira ng BFF mong si BBM at ang pamilya nya. The Marcoses destroyed Toyota. They plundered the economy. Why do PR for BBM wittingly or unwittingly? — Tonyo Cruz (@tonyocruz) January 21, 2018 Toyota was only able to reopen business in the Philippines in 1988. The family of James Deakin’s friend had to be deposed first. I’m a son of a foreman at Delta Motors. Our family and those of other workers personally know the appetite for greed of the Marcoses. — Tonyo Cruz (@tonyocruz) January 21, 2018 So when we see a transport journalist help REHABILITATE & DEODORIZE a member of this family of thieves — it is a personal affront. A personal insult. This is on top of the fact that we expect better from a journalist who benefits from freedoms restored by the anti-Marcos struggle — Tonyo Cruz (@tonyocruz) January 21, 2018

Marcos lost to Vice President Leni Robredo by only 263,473 votes in the 2016 elections. He accused Robredo and the Liberal Party (LP) of robbing him of victory, and filed an electoral protest against the Vice President in June 2016. – Rappler.com