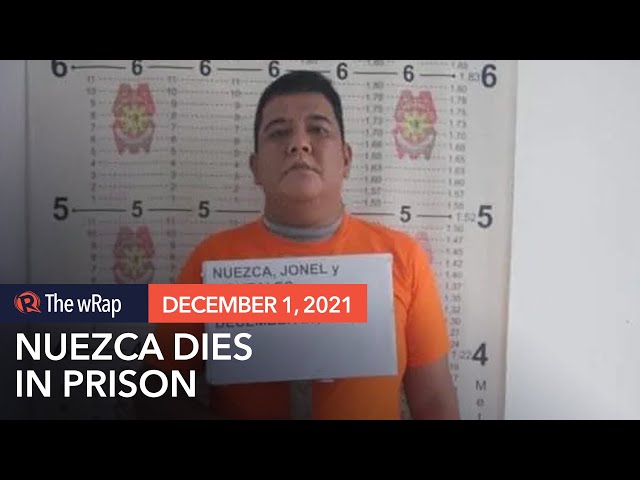 MANILA, Philippines – Convicted murderer and former policeman Jonel Nuezca has died inside the New Bilibid Prison (NBP) for causes still unknown. Authorities launched an investigation if there was foul play.

Bureau of Corrections (BuCor) Spokesperson Gabriel Chaclag confirmed to reporters on Wednesday, December 1, that Nuezca was pronounced dead at the Bilibid hospital at 6:44 pm on Tuesday, November 30.

“He was brought unconscious to the NBP Hospital by his cell mates at 6:30 pm yesterday, Nov 30, 2021,” Chaclag said, adding that Nuezca’s remains will undergo autopsy.

“Investigation ongoing to determine if there is foul play in the incident,” Chaclag added.

Chaclag said Nuezca was with a fellow convict walking outside their dormitory when he collapsed.

Nuezca shot and killed mother and son Sonya and Frank Gregorio in Paniqui, Tarlac, in December 2020 over a neighborhood dispute, the shooting all caught on video. Nuezca was off-duty at the time of the incident, reigniting debates on abusive policemen and the failure of the Philippine National Police to discipline its members. Nuezca, it turned out, had faced charges before but kept his job.

Nuezca’s trial was swift, and by August 2021, he was convicted of murder and sent to Bilibid.

Nuezca is the latest high-profile Bilibid convict to die inside the national penitentiary, which has long been hounded by controversies, not least of them mysterious deaths from the onset of the COVID-19 pandemic to now.

The death of drug lord Jaybee Sebastian, a key witness in the drug trial of jailed opposition senator Leila de Lima, prompted curiosity in the Senate but congressional inquiries never pushed through. Sebastian was among the high-profile convicts who died in a special facility within days of each other.

Rappler’s investigations also showed a high number of deaths at the peak of the pandemic, dozens of them without clear causes as prisons tried to contain a coronavirus outbreak without sufficient testing.

The Department of Justice, which supervises the BuCor, had announced its own investigation into the Bilibid, especially after successive deadly riots, but none has come out of it yet. – Rappler.com