Slain rebel leader Jorge Madlos frequented Cagayan de Oro to seek medical treatment in the months before he was allegedly killed in an encounter with government troops last weekend.

“Here in Cagayan de Oro and Bukidnon, the NPA has a network of supporters who are doctors and nurses who attended to Madlos,” Almerol told Rappler. Almerol said Madlos, 72, who hails from Dapa, Surigao del Norte, had suffered from kidney failure and had to wear a colostomy bag.

He said Madlos, popularly known as Ka Oris, used to come down to Cagayan de Oro for dialysis.

A source in Cagayan de Oro told Rappler he used to administer intravenous medication to Madlos until it stopped more than a year ago.

He said he once accompanied the rebel leader to a hospital in Cagayan de Oro where blood samples were taken.

“Madlos did not alight from the vehicle. He had his blood sample taken right inside the vehicle by a sympathetic nurse,” he narrated.

Major General Romeo Brawner Jr., 4th Infantry Division commander, said there was no doubt that Madlos enjoyed a network of physicians and nurses in Cagayan de Oro and Bukidnon who were either his friends or sympathizers.

He pointed out that Madlos graduated from the state-owned Central Mindanao University in Musuan, Bukidnon. Brawner said the first time they had proof that Madlos was in Bukidnon was when they found a colostomy bag among the firearms and belongings left behind by the NPA rebels after the clash in Sitio Cogon, Barangay Manalog, Malaybalay City on September 21.

“We also interviewed several residents who saw the rebels carrying a man on a chair as they withdrew,” he said.

After that, Brawner said, the hunt for Madlos was launched in Bukidnon.

The Philippine Medical Association’s Code of Ethics provides: “The primary objective of the practice of medicine is service to mankind irrespective of race, age, disease, disability, gender, sexual orientation, social standing, creed or political affiliation. In medical practice, reward or financial gain should be a subordinate consideration.”

Another clause in the code reads: “The physician should hold as sacred and highly confidential whatever may be discovered or learned pertinent to the patient even after death, except when required in the promotion of justice, safety and public health.”

Meanwhile, the Communist Party of the Philippines (CPP) called for autopsies on the remains of Madlos and his medical aide Eighfel Dela Peña to determine exactly how they died in Bukidnon province.

The call came in the wake of allegations made by Madlos’ widow, National Democratic Front (NDF) secretary for northeastern Mindanao Myrna Sularte aka Maria Malaya, that the communist rebel leader and his companion were not in the position to fight back when they were killed in Sitio Gabunan, Barangay Dumalaguing, Impasug-ong, Bukidnon province. 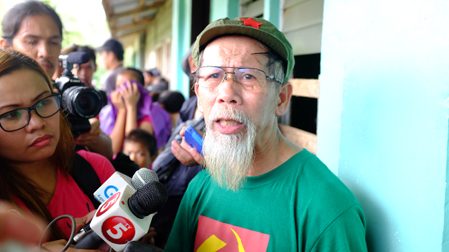 The Army’s 4th Infantry Division responded, accusing communist rebels of double standard and twisting facts about the death of Madlos and Dela Peña as it maintained that the rebels were killed during a legitimate military offensive.

“The death of their leader hurt them. We don’t want to dignify their stories and claims about how the two died,” Major Francisco Garello Jr., 4th ID spokesman, said on Tuesday, November 2.

In a statement, the CPP accused the military of faking an armed encounter and of launching an airstrike four hours after Madlos and Dela Peña were killed “to conceal their crime of murdering unarmed revolutionaries and create a false picture of an armed encounter.”

“Whether they were ambushed while moving or were accosted and thereafter executed is still unclear. Clearly, however, they were not in a position to give battle or fight back and were murdered in cold-blood,” read part of the CPP statement.

Marco Valbuena, CPP information chief, told Rappler on Monday, November 1, that it was not the first time for ailing or unarmed NPA leaders to be killed in what the military called encounters.

He cited NPA leaders in Mindanao – Leonido Nabong, Alvin Luque, and Dennis Rodinas – who were allegedly made to look like fatalities in legitimate military operations.

The military has claimed that Nabong, NPA deputy secretary for western Mindanao, was killed in an encounter in Tampilisan town, Zamboanga del Norte in November 2020.  Valbuena said Nabong was already in bad shape and could no longer run.

Luque, who was NDF spokesman for Mindanao, was shot dead in Tandag City, a month later. The military said Luque was shot because he resisted arrest, but Valbuena alleged that the rebel leader was unarmed and was partially paralyzed. Another was 45-year-old Dennis Rodinas, a ranking officer of the NPA in southern Mindanao, who was shot dead on October 11, 2020 in Cebu City.

Authorities said Rodinas fought back during his arrest, a claim Valbuena rejected, saying the rebel leader was seeking medical treatment in Cebu due to a lingering illness at that time.

Valbuena said autopsies to be performed on the bodies of Madlos and Dela Peña would show exactly how the rebels were killed.

“The families of Ka Oris (Madlos) and Ka Pica (Dela Peña) are in a position to demand that independent pathologists perform an autopsy on the bodies of the victims to determine the actual circumstances of their killing,” he said.

Major Garello, however, said the decision to perform autopsies on the bodies would be left to the discretion of the police or the local government.

“The decision to perform autopsies or not is not ours to make,” Garello said.

He maintained that the rebels were killed during an encounter on Saturday, October 30, and not a night before as alleged by communist rebels.

“They can believe what they want to believe and make up their own version of the story, but the burden of proof is on them. What they are doing is they’re appealing to emotions. We will not dignify their twisted stories,” he said.

Garello said the military has caught several high-ranking NPA leaders before and they have attested that the military treated them fairly.

He added: “Hindi namin gawain yang mag-drama (We are not into creating scenarios). Frankly, we are not happy that people are getting killed because we are human. But we are happy that justice has been served. Many died because of Madlos’ reign of terror.” (with reports from Herbie Gomez / Rappler.com)