MANILA, Philippines - Senate President Juan Ponce Enrile's book launch was the place to be Thursday night, September 27. Everyone who matters, used to matter, and wants to matter in Philippine politics packed the Rigodon Ballroom of The Peninsula Manila in Makati for Enrile's much-talked about memoir.

It's his chance to tell his own story.

"Juan Ponce Enrile: A Memoir" is a 754-page autobiography of one of the country's most controversial and, to martial law victims, one of the most hated personalities. He begins the book with a detailed description of his birthplace in Gonzaga town in Cagayan and ends it with a thorough explanation of his vote to convict former Chief Justice Renato Corona in the historic impeachment trial that he presided over in early 2012.

The memoir was published by ABS-CBN Publishing, which is owned by the Lopez family, one of the families whose businesses suffered under martial law. ABS-CBN, in fact, was one of the first media companies shut down by the Marcos government after the 1972 declaration of martial law; Enrile was then defense minister.

ABS-CBN did not only publish the book; it also aired the book launch live on its news channel ANC and website www.abs-cbnnews.com. Last Sunday, September 23, ABS-CBN aired the documentary "Johnny," which was based on the book.

The patriarch of the Lopez family felt the need to explain ABS-CBN's role in all this. In his opening speech at the launch, Lopez, whose brother Geny (father of ABS-CBN boss Eugenio Lopez III) was jailed by Marcos, said: "I know what most of you are wondering about as you listen to me now. What is the patriarch of the Lopez family doing here appearing chummy with the implementer of martial law? Why did ABS-CBN publish his autobiography when the network was the earliest casualty of the martial law regime?" 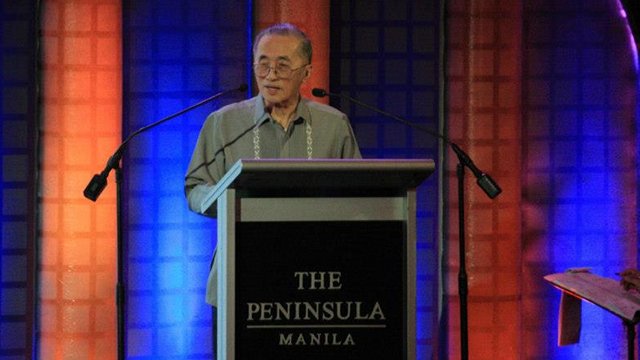 "I know it is not easy to understand. Even for me, I most likely wouldn’t have thought this day possible. Perhaps with the passage of time… all 40 years of it… I try to view things from as many perspectives as possible. And I have realized that it helps to see, as well, the humanity of those of us who lived through that horrible time including those from the opposite sides of the street," he added.

He said: "Johnny wrote that even he was a victim of the Marcos dictatorship, having been used as the pretense for the issuance of Proclamation 1081, as his car was supposedly ambushed right in front of my house in Wack Wack Village. He also wrote about how his life was placed in danger as a military clique under General Ver who plotted to assassinate him weeks before People Power finally erupted in 1986."

Lopez said he read Enrile's memoir. "It's interesting and compelling. It is obviously different from mine," he said. But it's a must-read for everyone, he added, if only to read an account of "someone from the inside."

President Benigno Aquino III, whose parents and family were also martial law victims, was Enrile's guest of honor at the launch. He said he welcomed Enrile's memoir, although he has not read it.

"I expect there will be many things Manong Johnny and I will certainly disagree on but I assume there will be points that we can agree on... In a democracy, where thoughts can contend, we must embrace the challenge and the opportunity those competing ideas represent," Aquino added.

His version of events

In the book, Enrile talks about his childhood, his search for his father, his struggle to get an education, his relationship with the past 6 Philippine presidents, and his role in the martial law years.

Book editor Nelson Navarro, who condensed the book from its original 2,000 pages, writes in his introduction:

"Some dramatic highlights can only provoke controversy among Enrile’s contemporaries and the public, including: how the coconut lobby came about, who was behind the sale of San Miguel to Danding Cojuangco, the real origins of ACCRA, how Enrile called the Imelda- Qaddafi agreement on Mindanao a betrayal of the nation in front of Marcos and Imelda, who stoked the Cory-Enrile conflict for their own interests, what’s behind the black propaganda against Enrile and his family, how the Cory regime tried and failed to tag Enrile for hidden wealth, the US bases issue and how it was manipulated by both sides all throughout the Marcos and Cory years, the unlikely femme fatale who brought the Enrile-Ver feud to an explosive climax, the last-minute secret deal Marcos supposedly struck with the Americans at the height of the Edsa revolt, how Enrile flatly rejected Marcos’ offer to step down from power and hand power to him, the rise of the Philippine Daily Inquirer and what led to the split between Eggie Apostol and Cristina Enrile, why and how Cardinal Sin deliberately misrepresented Enrile’s role in Edsa, plus many, many more."

In February 1986, Enrile, then defense minister, and AFP vice chief Gen Fidel Ramos mounted a coup against then President Ferdinand Marcos, which was eventually backed by civilians and catapulted Corazon Aquino to the presidency. Marcos defeated Mrs Aquino in the February 1986 snap elections that many said were rigged.

But Enrile himself plotted to oust Mrs Aquino, which caused his detention for a few days. Military rebels associated with him, led by then Col. Gregorio Honasan (now senator), were behind at least 7 coup attempts against the administration of Corazon Aquino.

When then President Joseph Estrada was impeached for corruption in December 2000, Enrile was one of the senators who defended and stood by him until he was ousted through the country's second "People Power" revolt in January 2011.

In May 2001, Enrile was indicted for his alleged participation in a failed mob attack by pro-Estrada forces at Malacañang Palace when Gloria Macapagal-Arroyo was already president. He was later cleared of the charges and made a successful senatorial run in the 2004 elections.

The book likely carries Enrile's own version of how these events transpired.

"I finally bare out my soul," a beaming Enrile tells reporters after the book launch. Writing it was a "roller coaster ride" for Enrile but in the end it was "gratifying." The 88-year-old politician left his book launch in a very good mood. 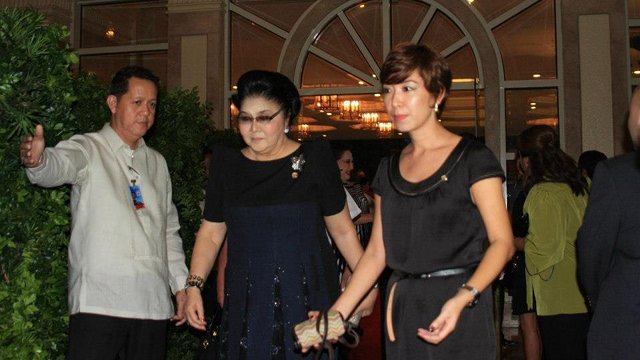 Manila will be abuzz with his revelations, said Enrile's son and namesake Cagayan Rep Juan Ponce "Jack" Enrile who delivered the opening remarks. It's time the country knows who his father really is and to correct the "misconceptions" of history, he added. The younger Enrile is seeking a senate seat in 2013.

Enrile's memoir seeks to change accounts of his role in the martial law years and his contributions to the "People Power" movement that ousted Ferdinand Marcos.

Navarro writes in his introduction: "Enrile’s very detailed minute-by-minute account of the Four Days of Edsa presents another view of history that sharply differs with and challenges the official yellow school of history, which understandably casts Enrile in a most unfavorable light."

Enrile also writes about the supposed animosity between him and former First Lady Imelda Marcos, who "singled him out as their rival in the forthcoming succession struggle as Marcos’ health deteriorated," writes Navarro in his introduction.

Mrs Marcos was present at the book launch. Enrile forgot to acknowledge her at the start of his speech but would later make up for it.

Navarro told Rappler: "It is going to be controversial. His version differs from people who were also actors, who were also involved in the same events. We heard only of what others have said about it. This is his first time to put in his two-cents worth."

Setting the Record Straight is an interesting chapter. Enrile claims "untruths" in books People Power—The Revolution of 1986, where Jaime Cardinal Sin supposedly "twisted" their conversation then. He also accused Sin of obstructing justice leading to his indictment for rebellion, a non-bailable offense.

Enrile told guests: "I've been judged and condemned many times but I feel only the ultimate judgment of God and history."

Is Enrile's book trying to revise history to tilt it in his favor?

"Let them read it first," Enrile said. "If there is a revision, they can write their own version. As I said, I don't have the monopoly of truth," he added.

Navarro says it's a revisionist in the sense that it is different from the "yellow filtering" of what happened.

"This is JPE's point of view. It's another point of view, of one of those who is a direct participant and one who played a large role in the making of history," Navarro said.

"All the other points of view have been aired and put into writing. He is contributing his own version of the events . It's up to the discerning readers to get a more balanced viewed of what actually happened. It's a continuing narrative. It takes a village to write the history of the nation," Navarro added. 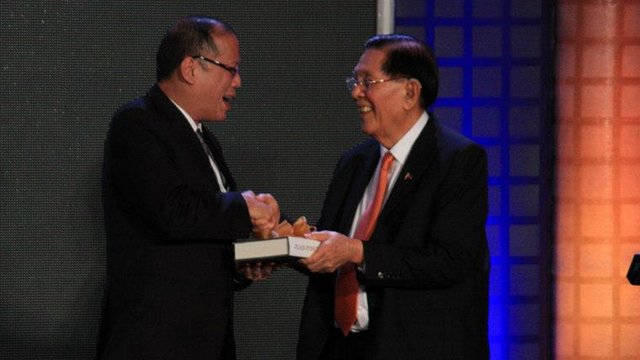 It took Enrile 4 years to write the book. He said the original plan was for his daughter Katrina to publish it when he's gone. But they decided it's best to publish it now so he can still answer questions that his book will raise.

The timing can't be more opportune, of course.

Enrile is enjoying his highest trust ratings, thanks to his widely appreciated performance as presiding officer in Corona's impeachment trial. If there's a perfect time for him to persuade people to altogether change their mind about him, it is now. - Rappler.com