After being red-tagged, Judge Ignacio given ‘concessions’ by Supreme Court 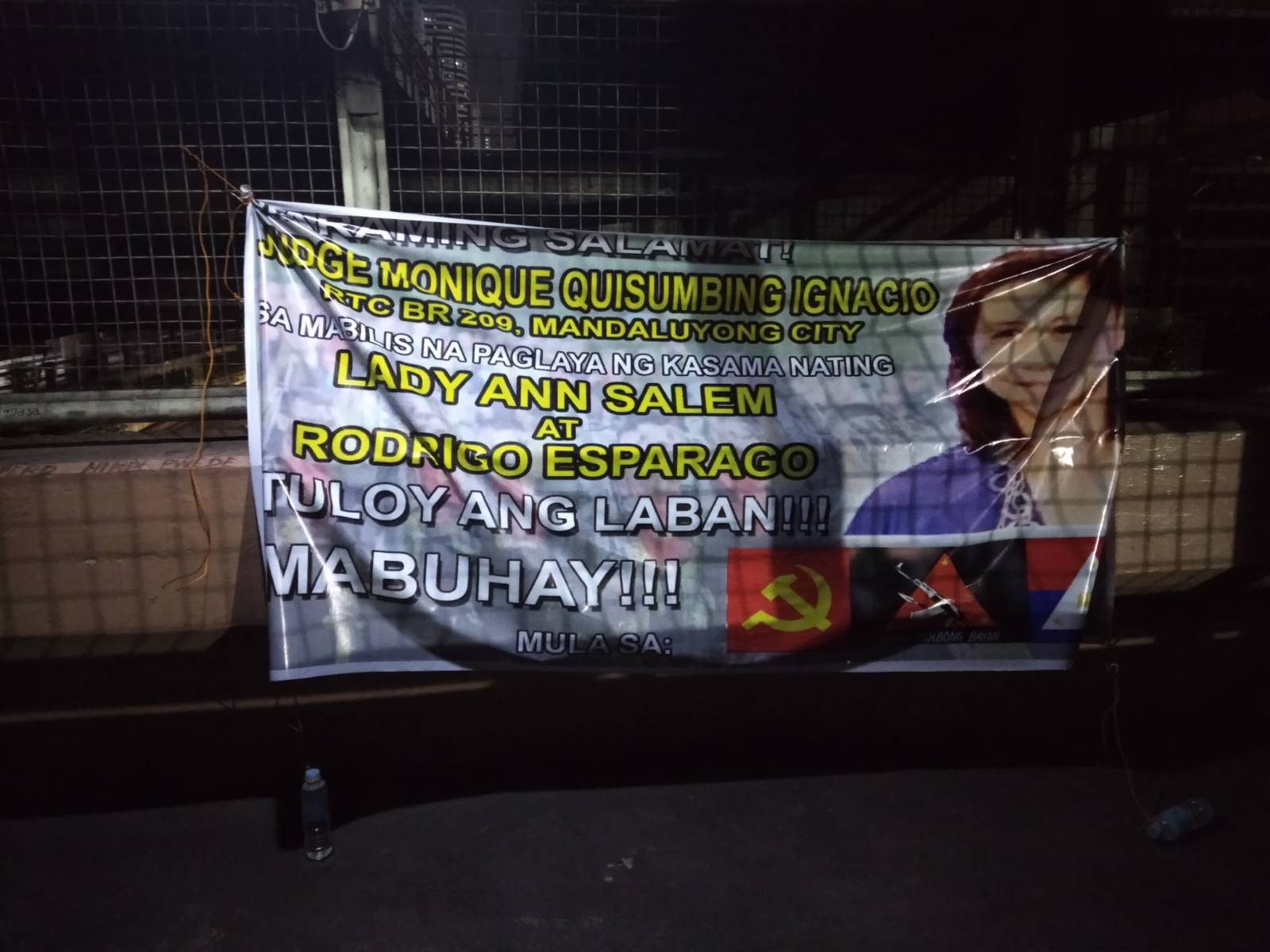 RED-TAGGED. After freeing activists, Mandaluyong Judge Monique Quisumbing Ignacio is red-tagged in a tarpaulin along EDSA.

Mandaluyong Regional Trial Court (RTC) Branch 209 Judge Monique Quisumbing-Ignacio has been granted concessions by the Supreme Court after she was red-tagged in a tarpaulin along EDSA weeks after freeing two activists.

“We have already given the concessions that she requested from us. We’ll just keep it confidential. You all know what we do when one is requesting for something, especially if she claims that her life is in danger. Of course we will do something about it, and we already did after she requested it,” Chief Justice Diosdado Peralta said on Friday, March 19.

Peralta did not disclose what the concessions were, but usually these are security details or some unloading of cases. In the case of Quezon City Judge Jocelyn Solis-Reyes, her court handled only Ampatuan massacre cases for the 10 years it was on trial.

“If her life is threatened, the first thing that we do is protect her because she’s our employee. Whatever it is, we have to protect her,” said Peralta, who was prompted to answer because reporters tailed him at an event in Caloocan on Friday.

The Supreme Court as an institution has not publicly condemned the red-tagging.

The tarpaulin had claimed that the Communist Party of the Philippines (CPP) was thanking Ignacio for quick action to free their “comrades,” in effect also red-tagging the freed activists. The CPP disowned the tarpaulin.

In freeing journalist Lady Ann “Icy” Salem and trade unionist Rodrigo Esparago, Ignacio voided the search warrant of her co-equal judge, Quezon City Executive Judge Cecilyn Burgos Villavert. This is a peculiar action that became the topic of the Judicial and Bar Council interview for chief justice, whether the move affects judicial stability.

This recent development adds up to a string of incidents that threaten members of the legal profession and intensify the pressure on the Supreme Court to take a more proactive action. The IBP and PNP have a partnership to address an alarming surge of lawyer killings, but this agreement was signed in light of the fact that at least four cases in the 61 killings under President Rodrigo Duterte had policemen as suspects.

The red-tagging of Ignacio is also being blamed on government forces, particularly the National Task Force to End Local Communist Insurgency or NTF-ELCAC.

“We cannot conclusively declare that this is so, because many of these cases have been under investigation, but regardless of the source or the author of violence, we condemn it,” said Cayosa. – Rappler.com