Facebook Twitter Copy URL
Copied
'As an ally, the United States stands with the Philippines in the face of intimidation and coercion in the South China Sea,' says Vice President Kamala Harris aboard a Philippine Coast Guard ship in Palawan

PUERTO PRINCESA, Philippines – US Vice President Kamala Harris made a historic trip to Palawan on Tuesday, November 22, as she ended her three-day Philippine visit as the Marcos administration’s most important guest in its first five months.

In a speech aboard the Philippine Coast Guard’s BRP Teresa Magbanua, Harris vowed that the US would stay committed to the Philippines, its oldest ally in Asia. Harris’ words – and her presence alone in Palawan, an island facing the West Philippine Sea (South China Sea) – also sent a clear warning to China as it continues acts of bullying in these volatile waters.

At stake, said Harris, is the international rules-based order, the livelihood of communities, and also the prosperity of America, which “relies on the billions of dollars that flow through these waters every day.”

Harris’ statement symbolized what many observers viewed as a new phase in PhIlippine-US ties, which fell to their lowest point under former president Rodrigo Duterte. A longtime city mayor without prior experience in national politics, Duterte at one point even announced his military and economic “separation” from the US.

Under Duterte, only Defense Secretary Lloyd Austin III and former state secretary Mike Pompeo visited the Philippines, both during the latter half of his presidency.

The renewed diplomatic push from Washington comes as stakes have risen for the two countries, with the Philippines poised as a strategic partner for the US and its competition with China.

In her final remarks, Harris also drove at a message central to her trip: that the US would defend the Philippines if attacked in the West Philippine Sea. 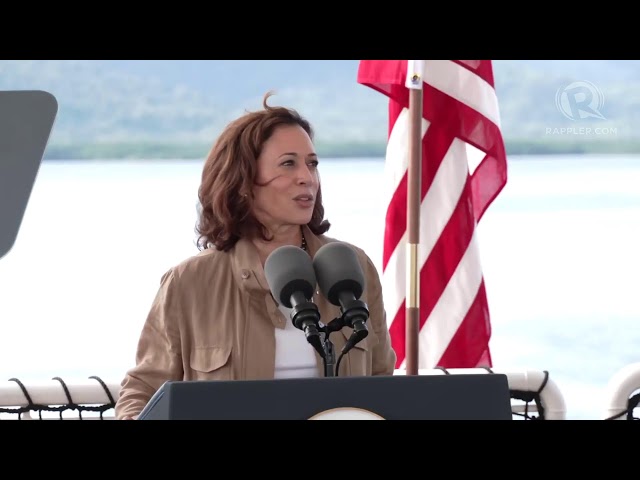 On the eve of her visit to Palawan, an incident between the Philippine Navy and Chinese Coast Guard had served as a reminder of simmering tensions in the West Philippine Sea. The Armed Forces of the Philippines’ Western Command, tasked with defending the country’s waters, reported that Chinese coast guard personnel had forcibly seized an unidentified object towed by Filipino sailors. Beijing denied the incident, calling it a “friendly” exchange.

China continues to assert its claims over a vast majority of the West Philippine Sea, despite legal ruling secured by the Philippines that struck down Beijing’s claims as illegal.

Harris rebuked China’s actions, saying it not only threatened international law, but Filipinos’ livelihood. Apart from illegally claiming Philippine waters, Filipino fishermen over the years have expressed frustration over the growing presence of foreign ships, including those from China, depleting catch in the West Philippine Sea.

Harris said the US backed the Philippines’ position on the South China Sea, and that it would rally international support from its allies “against unlawful and irresponsible behavior.”

“As an ally, the United States stands with the Philippines in the face of intimidation and coercion in the South China Sea,” she said. “As the United States has long made clear: We support the 2016 ruling of the UN Arbitral Tribunal, which delivered a unanimous and final decision firmly rejecting China’s expansive South China Sea maritime claims. The tribunal’s decision is legally-binding, and must be respected.”

Harris had delivered a similar message to President Ferdinand Marcos Jr. during a bilateral meeting in Manila on Monday, November 21.

America and its ‘profound stake’

While in Palawan, Harris also visited the local fishing community of Tagburos, which contributed over half of Puerto Princesa’s fish supply. “Communities like this have seen the consequences when foreign vessels enter Philippine waters and illegally deplete the fishing stock, when they harass and intimidate local fishers, when they pollute the ocean, and destroy the marine ecosystem,” she said.

Before leaving the Philippines, Harris unveiled at least 17 new initiatives between both countries, including programs to support local communities affected by illegal fishing. She also announced that the Philippines was now receiving near-real-time information under the Quad’s Indo-Pacific Maritime Domain Awareness initiative and would receive additional funding aimed at completing projects stalled under the Enhanced a Defense Cooperation Agreement and strengthening the PCG.

After her speech, Harris shook the hand of each Philippine coast guard personnel who flanked her sides, before departing for the Puerto Princesa International Airport.

“To the Philippine Coast Guard, you are on the front-lines of standing up for the international rules-based order,” Harris told them in her remarks. “Each and every day, as you patrol these waters, you uphold the rules and norms that are vital to the prosperity of the Filipino people, and people around the world.”

“The United States – and the broader international community – have a profound stake in the future of this region. America’s prosperity relies on the billions of dollars that flow through these waters every day. And we are proud to work with you in your mission,” Harris said. – Rappler.com