“Elisa ‘Tita’ Lubi, after complying with all the requirements, was allowed to post bail yesterday, May 17, 2021, assisted by counsel, in relation to the bailable trumped up charge of attempted murder against her before a Davao City court,” Karapatan said in a statement.

The rights group added Lubi was held under the custody of the police while processing her bail.

Lubi, 78, was arrested around 2:15 pm on May 17 in Barangay Industrial Valley Complex, Marikina City, through a warrant of arrest issued by Judge Ronald Tolentino of Regional Trial Court Branch 52 based in Davao City, according to Marikina City police.

The Karapatan national chairperson, along with Karapatan Southern Mindanao Region Secretary General Jay Apiag, were charged with attempted murder over an alleged armed encounter between elements of the New People’s Army (NPA) and the Philippine Army’s 89th Infantry Battalion and 10th Infantry Division in Davao City on May 20, 2018.

Lubi, a senior citizen with no physical capability to be involved in armed combat, was slapped by charges filed through the sworn affidavit of Corporal Elvin Jay Claud.

According to Karapatan, the case was filed on June 3, 2020 – two years after the alleged encounter. The group added both Lubi and Apiag did not receive subpoenas for the preliminary investigation of their case. 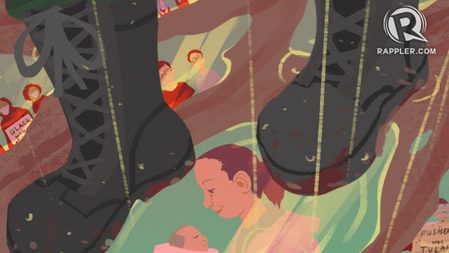 On March 29, Lubi filed a motion before the Davao City court to manifest that she was in Metro Manila when the alleged encounter took place in Davao City. She also stated that it is “physically implausible for [her] to engage in an armed combat for she was 75 turning 76 years old, and suffering from the usual conditions ailing people of such advanced age.”

Lubi is suffering from hypertension and arthritis.

In a statement released on March 29, Karapatan Secretary General Tinay Palabay said the charges have no factual basis and were only meant to harass human rights workers.

“This attempted murder charge filed by the military is bereft of any factual basis… Clearly, these charges are pure hogwash and judicial harassment targeting human rights workers,” Palabay said.

During the dictatorship of Marcos, Lubi became a political prisoner. That’s why she helped to assure the passage of the Human Rights Victims Indemnification Law and the process of the actual compensation for victims as one of the National Board of the Samahan ng Ex-detainees Laban sa Detensyon at Aresto (SELDA).

She is a former member of Karapatan’s National Executive Committee and former interim Regional Coordinator of the Asia Pacific Forum on Women, Law and Development (APWLD).

In 2018, Lubi was among 600 individuals listed in a petition proscribing the Communist Party of the Philippines (CPP) and the NPA as terrorist organizations. – Rappler.com