FOR BABY RIVER. Along with her mother and aunt, Reina Mae Nasino (in black shirt) offers prayers and lights candles at the tomb of her child Baby River at the Manila North cemetery on December 23, 2022, a day after she was released on bail.

MANILA, Philippines – Activists Reina Mae Nasino, Alma Moran, and Ram Carlo Bautista walked free on Thursday, December 22, after more than three years in jail but their freedom is only temporary, because a Court of Appeals (CA) decision finding the search warrant void was not enough to stop their lower court trial altogether.

It even took three more months from the CA decision in September to win a bail petition, and then plead the court to reduce the amount because there was no way they could afford to pay P1.4 million. In the end, they were allowed to pay P282,000 to an insurance company for surety bond.

It’s proof of a very slow justice system, said Bautista, talking to Rappler on Friday morning, December 23, a day after they saw freedom.

Frustration is high among the progressives – not only did the three activists lose three years of their lives on charges that were based on what the CA declared to be a faulty warrant, but a child died in the process, too.

Nasino, only 23 years old when they were arrested during a massive crackdown on the Left in November 2019, found out she was pregnant inside prison. She wasn’t able to win a plea for either hospital arrest so she could stay with her baby, or for her daughter River to stay with her at the Manila Female Dormitory. At three months old, River – separated from mother at infancy – died from pneumonia complications.

Nasino on Friday was still emotional, saying, “Na-trauma po talaga ako sa nangyari, hindi ako nabigyan ng pagkakataon na magluksa sa anak ko (I was traumatized by what happened, I wasn’t even given the chance to grieve for my child.)”

An image of Nasino, on a three-hour furlough by the court, holding a flower with her handcuffed hands and in full protective suit surrounded by police officers with high-powered weapons during River’s burial is seared into memory.

A warning to judges?

Nasino said that as early as the inquest, when police presented the alleged guns and grenades seized during a raid in their Manila office, she knew they were going to be in jail for a long time.

None of the pleas in the lower court, where they alleged irregularity in the search warrant and claimed that the guns and grenades were planted, worked with Judge Marivic Balisi Umali of Manila.

The CA later declared that neither the issuance of the search warrant from the so-called factory of Quezon City Judge Cecilyn Burgos Villavert nor the execution of the police followed constitutional rules. The CA justices even questioned why Umali did not let the activists access records from Villavert’s court.

Translated to simple language, the CA justices wondered why Umali was not interested in seeing the records for herself.

“There was therefore really no opportunity for respondent Judge to judiciously assess the merits of petitioners’ Motions. She had the chance but she let it pass on the basis of a mere technicality,” said the CA, even going as far as castigating the judge for not entertaining a plea that was late by only five days.

“Respondent Judge’s denial of petitioners’ Joint Omnibus Motion for Reconsideration, etc. simply on the ground that it was filed beyond the 5-day period is simply too strict a sanction compared with what petitioners stand to lose by reason of such denial,” said the CA.

The 36-page decision of the CA read like an indictment of the whole system that got the three jailed for more than three years. Yet in the legal processes, there needed to be more maneuvers from the activists’ human rights lawyers to convert that to a full victory. For Christmas, they settle for temporary release on bail.

“Sana ‘yung kasong ito maging babala dun sa mga judge na nagpapagamit sa gobyerno at kapulisan, mali ‘yun, sana matuto sila (I hope this case serves as a warning to the judges who allow themselves to be used by the government and the police, it’s wrong, and I hope they learn),” said Bautista.

Their lawyers weren’t remiss in trying to seek accountability from the authorities involved in their cases – yet nothing has come out of these attempts. “Sa kabila po ng nangyari sa amin, nandoon pa rin ‘yung pag-asa na may mananagot (Despite what happened to us, there’s still hope that someone will be held accountable),” said Moran. 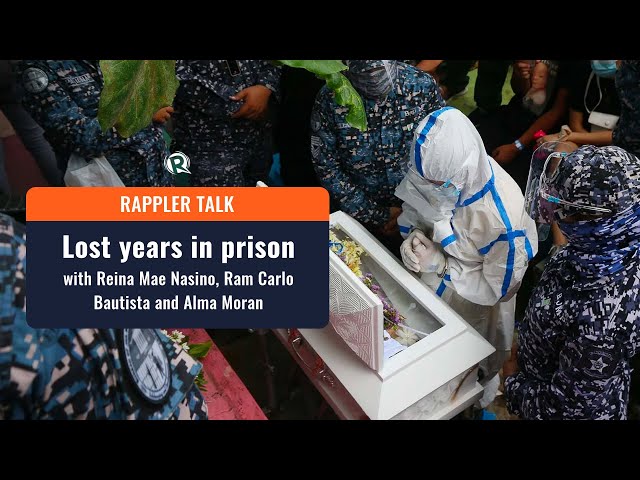 More to fight for

When Nasino buried her daughter, she whispered to the coffin: “Lalaya ako nang mas matatag (I will be freed a stronger person).”

She said she still feels like she has become stronger, hardened by the experiences of being a prisoner in a jail where, according to her, there were days when they needed to make do with only three dippers of water a day. There was no natal care facility, Nasino said. Her pregnancy also did not convince the Supreme Court to approve humanitarian release for vulnerable prisoners like her during the raging pandemic in 2020.

Besides, there are more things to fight for, like prison decongestion, said Bautista who described his first detention cell in the police station like a chicken cage. He said he met a prisoner sentenced to life who found out really late that he had apparently won his appeal.

Moran, Bautista, and Nasino are the 28th, 29th, and 30th activists freed by courts this year alone in a streak of victory for the progressive ranks. Yet that number represents something bothersome – dozens of people being arrested and losing years in prison on what would later turn out to be faulty charges.

And in all of this, the biggest loss: the life of an innocent infant.