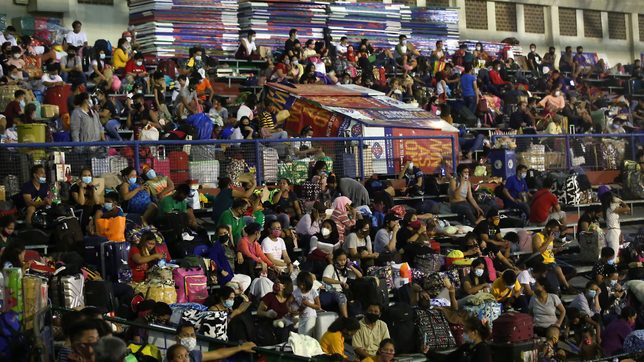 Facebook Twitter Copy URL
Copied
The House committee on good government and public accountability sent out invitations just two days before the hearing, but lawmakers say that is not an excuse for officials to be no-shows

Ranking congressmen hit officials of the Hatid Tulong program and the Department of the Interior and Local Government (DILG) for failing to attend a hearing on the plight of locally stranded individuals (LSIs).

On Thursday, July 30, the House committee on good government and public accountability started looking into the status of LSIs after thousands of them were pictured stuck together at the Rizal Memorial Stadium while waiting for trips back to their provinces. (READ: Hatid Tulong official appeals for public understanding over packed Rizal stadium)

It was a clear violation of the government’s physical distancing rules in the middle of the coronavirus pandemic.

But Joseph Encabo, the lead convenor of the Hatid Tulong program for LSIs, did not heed the House panel’s invitation to attend the hearing. The DILG also did not send any officials.

Upon learning this, House panel vice chair and Anakalusugan Representative Mike Defensor said their absence was an an “insult” and “affront” to Congress.

“How can it be that the department in charge is not even here to shed light on the problem that not only us, but the whole country is facing?… I think this is an affront not only to the committee but to Congress itself,” said Defensor in a mix of English and Filipino.

He then directed the committee secretariat to write a “strongly worded letter” to DILG Secretary Eduardo Año over the House hearing snub.

(May we direct the committee secretary to write a strongly-worded letter to Secretary Año because they insulted the committee by not sending any representative from their department?)

When the committee secretariat said Encabo was also absent, Remulla moved that a letter should also be sent to him and the rest of the Presidential Management Staff, of which Encabo is also an official.

“I think they should also be advised that they have to obey the summons of this committee because this matter has to be resolved, and they’re the ones who are actually in charge of that spectacle that happened in Rizal Memorial,” said the Cavite 7th District congressman.

Still, Defensor admitted on Thursday that the hearing was organized at the last minute, since invitations were sent out only two days ago on Tuesday, July 28. This was also just a day after President Rodrigo Duterte’s 5th State of the Nation Address.

But Defensor said that is still not an excuse for the invited officials not to show up.

(We scheduled this at the last minute because we saw the problems faced by our countrymen. Many of them are still stranded, and we don’t know what’s really the problem causing it.)

Encabo already held a press briefing to admit they did fail to anticipate the huge number of LSIs they needed to bring home. Still, Encabo said they decided to put the LSIs at the Rizal Memorial Stadium instead of just leaving them out in the streets.

Encabo later told ABS-CBN News that there are no more stranded Filipinos in the sports complex as of Thursday morning, after the last batch of 1,017 passengers boarded a ship en route to the Zamboanga Peninsula.

Still, 48 were left behind after their rapid tests yielded positive results for COVID-19. They are currently in various quarantine facilities in Metro Manila while waiting for the results of their swab tests.

The national government has since canceled its plan to require all LSIs to undergo a swab test before going back to their home provinces. Instead, they have placed the burden of testing on local governments accepting the stranded. – Rappler.com