VACCINE. A senior citizen gets a COVID-19 vaccine at home, administered by health workers at Marikina, Metro Manila, Philippines, May 5, 2021. 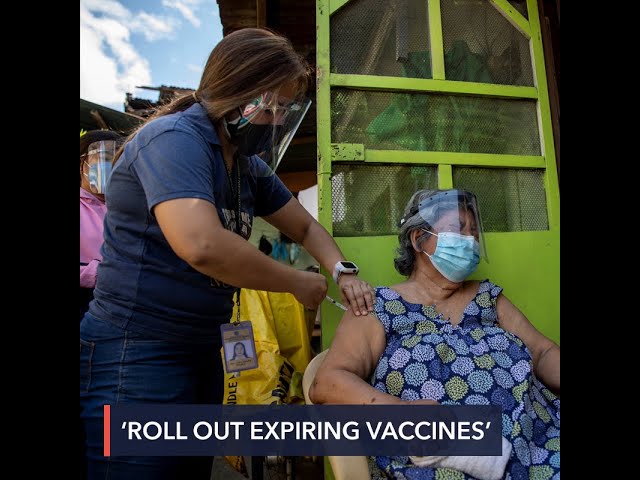 “The government should just give the stocks that will expire in June to the competent private sector then let them do the vaccination. They can just give back what they got when their stocks arrive in June,” Leachon said on Wednesday, May 12.

Leachon was referring to the supply of about 1.5 million AstraZeneca doses scheduled to expire by June 30, 2021. The doses were part of the recent shipment of 2 million doses from the World Health Organization-led COVAX global facility, which arrived in the Philippines on May 8.

“We are still at 40-60 [thousand] vaccination[s] per day. At this rate we can never finish the AstraZeneca 1.5 [million] stocks that will expire in June,” Leachon said, adding, “Sayang…super sayang (What a waste)!”

Aside from this, Leachon also suggested government should open up vaccination to the next priority sector, A4, composed of economic frontliners from several industries and government agencies.

The Department of Health (DOH) earlier said the 2 million AstraZeneca vaccines would be given to over 500,000 individuals who received the first dose of the vaccine in March, while the rest will be used as first doses for all eligible patients from priority groups A1 to A3, including health workers, senior citizens, and people with comorbidities.

DOH Undersecretary Maria Rosario Vergerie had earlier sought to address concerns on the expiration of some AstraZeneca doses in June, saying the WHO had given them notice beforehand and that this was normal, considering vaccines developed against COVID-19 had an average shelf-life of about 6 months from manufacturing to expiration.

With logistics and deliveries across continents, Vergeire said this means that vaccines which arrive in the Philippines may see shorter periods of storage before expiration. Such factors, however, underscore the complexity of rolling out vaccines as well as the urgent need to speed up the distribution of shots in the country.

Since launching its vaccine drive on March 1, around 1.79% of the country’s population have received the first of two doses of the vaccine. Meanwhile, those who have taken both jabs represent around 0.41% of the population as of May 8. – Rappler.com