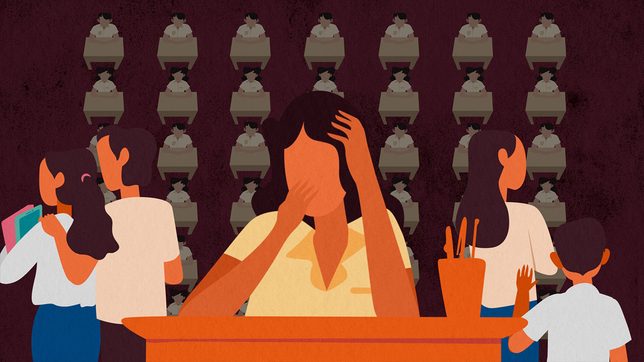 Facebook Twitter Copy URL
Copied
Two weeks before the scheduled opening of classes on August 24, the Department of Education will present how the distance learning works

In the ideal envisioned distance learning approach, parents would have an active role. They would facilitate and guide their children through the modular lessons that would be sent to students undergoing remote learning.

However, this loomed as a big challenge to students who do not have anyone to facilitate learning at home. (READ: FAST FACTS: DepEd’s distance learning)

“There are parents who are “no-read, no-write.” They are sending their children to school because they don’t want their children to be like them. Who would teach the students now at home? This kind of modular learning is really difficult. Not all parents are capable of guiding their children,” said *Aika, a public elementary school in Laguna, in a previous interview with Rappler. (READ: No student left behind? During pandemic, education ‘only for those who can afford’)

But the Department of Education (DepEd) has a solution for this.

The assigned learning facilitators may also communicate to students through text messages, phone calls, and other available forms of communication.

The DepEd said the following teachers are exempted from home visitation:

” In which case, school officials like school heads, public schools district supervisors, education program supervisors and responsible community stakeholder may be assigned to attend to the organized clusters of learners, particularly in cases where assistance of a learning facilitator is much needed by the learners,” the DepEd order read.

Asked if this setup would be applied all over the country, Education Undersecretary Diosdado San Antonio said the order sent to BARMM DepEd would be incorporated in the forthcoming policy for distance learning.

“Yes, until a DO (DepEd order) is released which will be more comprehensive. The essential features of what I signed are also covered in the DO,” San Antonio said in a Viber message to Rappler on Friday, July 31.

In a pre-recorded meeting of the cabinet members with President Rodrigo Duterte aired on Friday morning, Education Secretary Leonor Briones said that DepEd would launch the school opening, including the distance learning guidelines, on August 10.

(On August 10, we will launch the school opening for this year, but we are practiced well since we already conducted dry-runs – how learning will be done on radio, TV, online platform, and modular.)

Briones reiterated that schools are ready for the class opening, citing simulations in different areas. (READ: No backing down: Briones says classes will open on August 24 ‘whatever form it is’)

(We can already start classes on August 24 using blended learning because we’ve been conducting dry-runs. Simulations were already done in all districts using different approaches.)

The DepEd achieved its target enrollment rate of 80% for the coming school year. According to latest data, some 22.2 million students have registered in public and private schools nationwide for school year 2020-2021, which is only 80% of last year’s 27.7 million enrollees.

Private schools have raised concerns over their “alarmingly low” enrollment turnout for the coming school year.

As of Thursday, a total of 1,373,362 students have so far enrolled in private schools – only a quarter of last year’s 4.4 million enrollees.

Modular learning is the most preferred by parents for the conduct of distance learning for the coming school year, according to a DepEd survey released on Thursday, July 30.