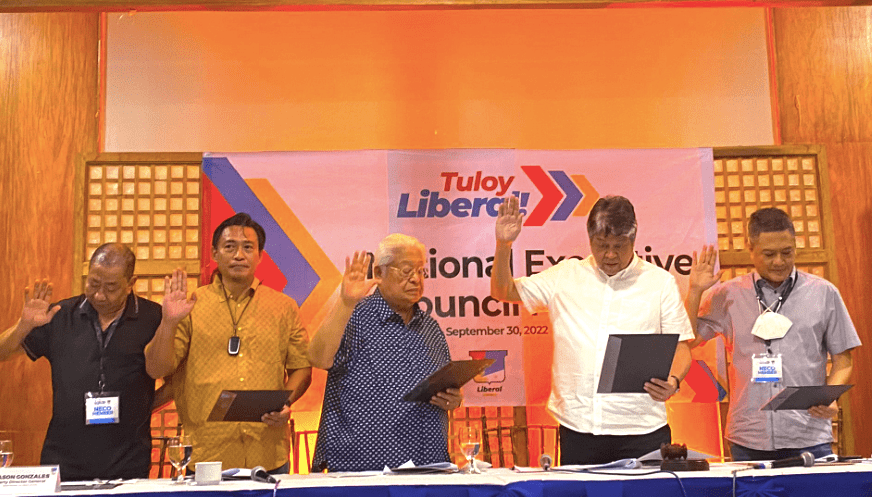 NEW OFFICERS. CHANGING OF THE GUARD. The new Liberal Party officers take their oath on September 30, 2022.

Lagman succeeded former senator and defeated 2022 vice presidential candidate Francis Pangilinan, who led the party as its president for the entirety of the Duterte administration.

In his acceptance speech, Lagman promised that the Liberal Party would mount a comeback in the upcoming elections.

“We shall relentlessly sustain and enhance the party’s enviable legacies of democratic liberalism, respect for the rule of law, protection of human rights, good governance and accountability, progressive taxation, campaign against authoritarianism and despotism, and genuine people empowerment,” Lagman said. “We look forward to the 2025 midterm elections and beyond. Babalik tayo (We will be back).”

“We are standing, we are alive, and kicking,” Pangilinan said. “Despite adversities, the Liberal Party remains steadfast in its fight for democracy through its liberal principles.”

“Today, we have over 400 elected officials, and over 10,000 non-politician members,” he added. “This is a considerable feat given the very limited budget and logistical challenges brought about by the pandemic, and the hostile political climate, having been in the ranks of the opposition since 2016.”

Here is a partial list of new LP officers:

LP was the ruling party from 2010 to 2016, when Benigno Aquino III was president.

The LP lost many of its members to PDP-Laban when Rodrigo Duterte, the tough-talking Davao City mayor who promised to end criminality and the proliferation of illegal drugs, succeeded Aquino.

In the 2019 and 2022 elections, none of the Liberal Party’s senatorial candidates secured a slot in the upper chamber.

Robredo ran for president in 2022 as an independent, in an apparent attempt to broaden her support base beyond her party.

She and her running-mate Pangilinan, who ran under the banner of LP, lost, but the latter said “there is no such thing as failure, only delay.”

“We are not done yet. We may not have reached our desired goals, but we have ignited a fire in the hearts of millions of our people, especially the youth, a fire for good governance and accountable leadership. That will never be extinguished, and shall in due time, spread like wildfire,” Pangilinan had said following their election loss. – Rappler.com