No choice but to go back home 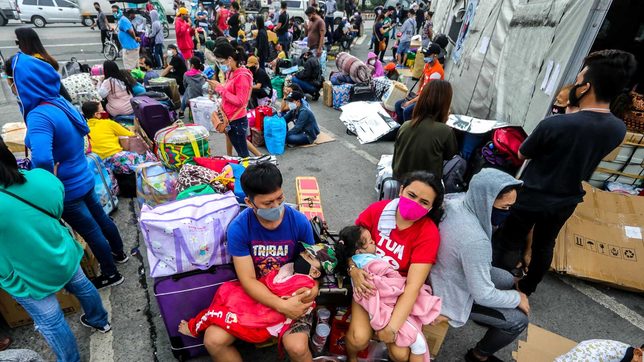 Joseph Elapro (Right) and his wife Beverly (Left) holds their children while sleeping and waiting for their scheduled ride outside the North Port Terminal in Manila on JUly 22, 2020. Photo by KD Madrilejos/Rappler

Holding his ticket that’s been cancelled 3 times already, Joseph Elopre, a tricycle driver in Taguig City, along with his wife Beverly and their 3 children tried their luck again on Wednesday, July 22, outside the Manila NorthPort Passenger Terminal in Manila. They want to finally catch a boat to their home in Zamboanguita, Dumaguete.

Joseph and Beverly carried their two children Gwen, 2, and Tricia May, 4, on their laps while their eldest Rhea Rose, 13, slept outside the terminal port. They have been here with other passengers early as 4 am even if their boat is scheduled to leave at 4 pm yet.

Joseph drives a tricycle in Upper Bicutan in Taguig and rents a small place where his wife takes care of their kids. For 4 months since the start of the lockdown, Joseph said he has received only P6,000 in government aid.

Beverly said they also have a problem with the requirement of providing a negative swab test result before travel. They could not afford the test, but they want to take their chances just the same.

Will the Elopre family finally make it?

According Local Government Secretary Eduardo Año, local governments have come up with a way to send to the provinces locally stranded individuals (LSIs) with the help of the Department of Transportation.

Travelers bound for the Visayas and Mindanao are required to submit their travel authority and health clearance, according to task force official Lt. Gen. Guillermo Eleazar. – Rappler.com