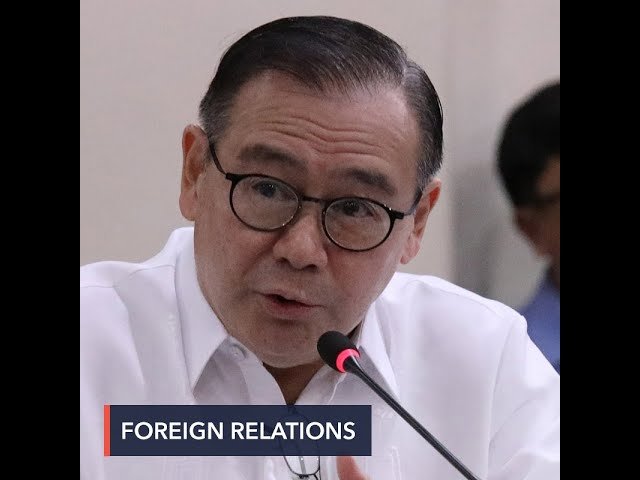 During the Department of Foreign Affairs’ (DFA) budget hearing at the House of Representatives on Monday, September 21, Locsin said the European lawmaker’s moves to tackle “nonsensical issues” such as Congress’ rejection of ABS-CBN’s franchise bid only showed “they have descended to the level of stupidity.”

Locsin was asked by Deputy Speaker Luis Raymund “LRay” Villafuerte to comment on the EU Parliament’s resolution which the lawmaker described as an “infringement” on Philippine sovereignty.

Villafuerte, who voted to reject a new franchise for ABS-CBN, took offense at the EU Parliament’s move calling on the Philippine government to grant the embattled broadcasting network a franchise, among others.

The DFA chief, however, said European lawmakers only brought down the stature of the EU Parliament by “attempting to interfere in every detail of our government.”

“I hate to use the word but really, they are discrediting themselves because they are picking up just anything that the enemies and the critics of Duterte are throwing at our President. You pick that up and who loses? You think us? The whole world knows what exactly are the prerogatives of a state,” Locsin told lawmakers.

“There are many great issues happening in Europe. There are wars in the eastern side of Europe, there are wars in the Middle East and North Africa that are going to reach Europe – that have already reached Europe. Do they want to discredit the European Parliament by picking up nonsensical issues? Well, that’s their problem,” he added.

In the same hearing, lawmakers pressed Locsin on what action he would take against European lawmakers who pushed for the resolution.

Deputy Speaker Dan Fernandez, for one, asked Locsin to declare EU Parliament member Hannah Nuemann a “persona non grata,” saying it is “just right” for the Philippines to act against the resolution and avoid appearing “lax.”

“Don’t you think it is quite proper to declare her a persona non grata considering that she is trying to interfere with our local governance?” Fernandez asked.

Locsin said that while it would be his “first impulse” to retaliate, declaring European lawmakers “perona non grata” may only be counterproductive as it “doesn’t hurt them” and instead “may hurt Filipinos.”

“Let them try to interfere with our internal process. What can they do? Really, what can they do? Affect our tariff preferences? Let’s see, because that has to do with bilateral relations and trade relations, and we have their ambassadors in the Philippines, and they will speak up for us because so far, we have gotten along very well,” Locsin said.

He added: “I am not afraid of them, I don’t need to declare them anything. I can answer them. Whether they believe me or not, I am now working with our responsible countries to establish the human rights credentials of the Philippines…. I’m not afraid of these people, I will not exclude them from the debate. If I did, then I’m a coward.”

Last September 17, European lawmakers recommended the revocation of the Philippines’ Generalized Scheme of Preferences Plus (GSP+) status if the Duterte government fails to answer for human rights buses.

Under the major trade incentive, the GSP+ status provides tariff perks for more than 6,000 Filipino goods. The EU grants this only to countries that have ratified “27 core international conventions in the fields of human and labor right, the environment and good governance.”

As the trade incentive includes the monitoring of these conventions, Neumann pointed out that the Duterte administration has repeatedly violated human rights and attacked journalists like Ressa.

“We don’t have these many tools in the EU to protect human rights and democracy, and maybe our trade policy is the strongest one,” Neumann said.