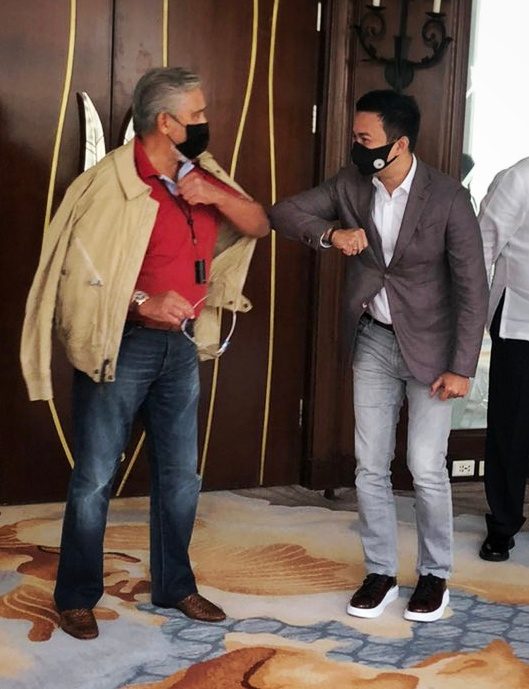 Senate President Vicente Sotto III (L) and Speaker Lord Allan Velasco rub elbows as they greet each other before their meeting on November 5, 2020. Photo courtesy of Velasco's office

Speaker Lord Allan Velasco is expecting a “good working relationship” with the Senate after Congress leaders held an informal meeting to decide on both chambers’ priority bills in the coming months.

“We look forward to a very good working relationship between the House and the Senate as both chambers strive to ensure the remaining sessions of the 18th Congress will be fruitful and productive,” Velasco said in a statement.

“We consider the senators as vital partners, allies and friends, and we thank the Senate leadership for this productive meeting,” the Speaker added.

The 18th Congress is currently on a break. The House will resume session on November 16, but the Senate will open a week earlier on November 9 to tackle the proposed P4.5-trillion budget for 2021.

This is the first time leaders of both chambers met in person after Velasco’s dramatic takeover as Speaker last month.

The Marinduque congressman successfully ousted his rival Taguig City-Pateros 1st District Representative Alan Peter Cayetano after the latter refused to honor their term-sharing deal that was brokered by President Rodrigo Duterte. (READ: INSIDE STORY: Cayetano’s hubris turns Batasan into the House of Lord)

Senators were initially concerned that the Velasco-Cayetano rivalry would derail the passage of the 2021 budget.

But the Velasco-led House worked overtime to submit the 2021 budget to the Senate on October 27, a day earlier than Sotto’s requested date of transmittal.

Velasco said Congress leaders agreed during the meeting that the proposed P4.5-trillion budget for 2021 “should be approved as soon as possible.”

The lawmakers also agreed to come up with a common legislative target in the next 5 months, particularly passing the bills that Duterte had asked Congress to pass in his 5th State of the Nation Address in July. (READ: LIST: 21 priority bills of Duterte in SONA 2020)

These include the 4 bills aiming to gradually ease corporate income taxes, help financial institutions with offloading their debts and managing their non-performing assets affected by the coronavirus pandemic, create a new Department of Overseas Filipinos, and the proposed Rural Agricultural and Fisheries Development Financing System Act.

All except the bill that would strengthen the financing system for the agricultural sector have already been passed on 3rd reading by the House. The bills are still pending with the Senate.

Velasco said the House asked senators to prioritize the passage of the Magna Carta of Barangay Workers to assist the frontliners during the COVID-19 crisis and the Internet Transactions Act, which seeks to protect consumers following the boom of online selling during the pandemic.

“The President, in his remaining years as our Chief Executive, can rely on Congress to help him fulfill his promises to our people before his term ends,” Velasco said. – Rappler.com