A side agreement complementing the Visiting Forces Agreement (VFA) between the Philippines and United States was now being reviewed by President Rodrigo Duterte’s office, Defense Secretary Delfin Lorenzana said in a recent Rappler Newsmaker interview.

Lorenzana said the side agreement would touch the issue of custody of troops temporarily in the Philippines – a controversial provision of the VFA, which Duterte had decided to ultimately keep in force after over a year of threatening to terminate it. 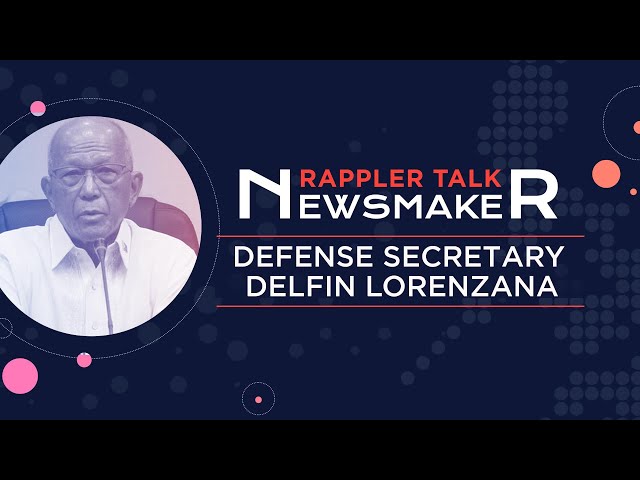 “I believe that after the retraction of the termination letter, I suppose that document will move forward…. It’s on the drawing board, it’s in Malcañang and is just waiting for the scrutiny of the OP (Office of the President) before it goes to the President,” Lorenzana said.

The defense chief said the document was crafted in coordination with US officials through the Presidential Commission on Visiting Forces (PCVF). Lorenzana said he was not privy to its contents, but expected the side agreement would tackle the issue of “true custody” of American military personnel, which had been an “irritant” for the Philippine side.

Public scrutiny over the issue of custody and the exercise of criminal jurisdiction had been renewed in 2020, after Duterte pardoned US Marine Joseph Scott Pemberton, who was convicted in December 2015 for the gruesome murder of Filipina transgender Jennifer Laude.

“Napakarami ang mga against na Filipino sa atin kasi katulad noong mga namatay, na-rape na hindi natin mahawak despite the fact that they committed the crimes here in the Philippines, so ‘yon ang one of the most contentious issue,” Lorenzana said.

(There are many Filipinos against this because there have those [soldiers] who murdered, raped, who we could not hold onto despite the fact that they committed the crimes here in the Philippines, so that is one of the most contentious issues.)

Asked if Duterte wanted a specific agreement on this as a condition for keeping the VFA, Lorenzana said the President did not ask for such. Rather, officials from the PCVF and security sector pursued the side agreement to address the public’s concerns and shape a way forward for the VFA’s implementation “na hindi naman argrabyado yung mga tao natin (in a way that was not disadvantageous to us),” he added.

“Hindi naman kami inutusan ni Presidente. Kusang-loob lang kami na tignan natin yung agreement (The President did not order us. We took it upon ourselves to consider that agreement),” Lorenzana said.

A senior Philippine government official earlier told Rappler the side agreement had been a product of intense negotiations and involved guidelines on “when and how” Philippine authorities would exercise jurisdiction and custody.

“The lack of implementing guidelines has created much problems. Having them will ensure predictability, transparency and fairness in the process,” said the official who declined to be named because they were not authorized to speak on the matter. Earlier, Duterte cited the move of the US to donate COVID-19 vaccine doses as a factor that pushed him to keep the VFA. The President made the decision after meeting with US Defense Secretary Lloyd Austin III, the first cabinet member of President Joe Biden to visit the Philippines.

With the VFA no longer under threat, Lorenzana said Balikatan military exercises between the two countries would now go on “full blast” in the coming year, if the pandemic would allow. Annual Balikatan (shoulder-to-shoulder) military exercises had been one aspect of security activities placed on hold due to the uncertainty spurred by the termination and successive extensions on the VFA’s suspension.

Lorenzana said discussions with Austin also touched on the acquisition of more military equipment for the Philippines, as well as, how to maintain a peaceful South China Sea.

With the VFA now secure, could joint patrols between the Philippines and foreign countries resume?

“Sa ngayon, hindi na muna siguro (For now, maybe not),”  Lorenzana said, adding the matter would need closer study on its “benefits” to the country. Despite this, Lorenzana said the Philippines’ position would also not stop other countries from conducting patrols in the South China Sea.

Meanwhile, asked if the Enhanced Defense Cooperation Agreement (EDCA) had been discussed with Austin, Lorenzana said the two defense chiefs had not been able to tackle it.

Diplomats and security officials agreed that while the VFA was critical, equally important would be seeing progress in EDCA’s implementation, another key military deal between the two countries.

After Lorenzana announced the Philippines would keep the VFA, Foreign Secretary Teodoro Locsin Jr. earlier said the US had shown its “commitment to fulfill its obligations to us under the alliance.”

“They have addressed issues arising from our security relationship with good faith.  Together, we have moved forward on the basis of common interest, shared values and mutual respect,” he said. – Rappler.com