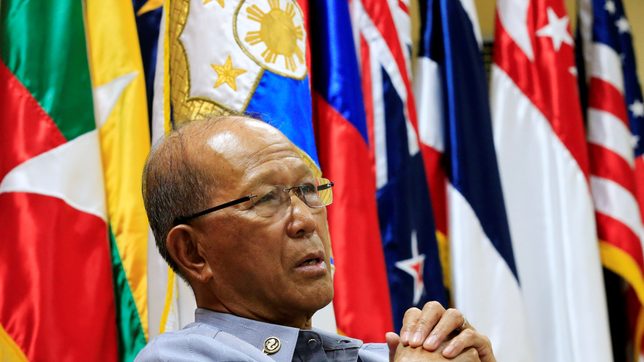 Defense Secretary Delfin Lorenzana on Saturday, April 3, reiterated the Philippines’ demand for Chinese ships to leave Julian Felipe Reef in the West Philippine Sea since they have no more reason to “take shelter” amid good weather.

“The Chinese ambassador has a lot of explaining to do. As of our latest maritime and aerial surveillance, there are still 44 Chinese vessels that are in Julian Felipe Reef,” Lorenzana said in a statement.

“I am no fool. The weather has been good so far, so they have no other reason to stay there. These vessels should be on their way out. Umalis na kayo diyan (Leave now),” he added.

Lorenzana said the Philippines has already lodged a diplomatic protest over the presence of the ships.  “We, again, reiterate our demand for the Chinese to leave our sovereign territories and abide by international law,” he said.

The defense chief had earlier said that the massing of ships – believed to be manned by Chinese maritime militia – in the area is “a clear provocative action of militarizing the area.”

China had denied that the ships are manned by its maritime militia and dismissed the allegation as an “unnecessary irritation.” It also claimed that the vessels were just taking shelter in the reef because of bad weather – though it had been observed that the vessels remained there even during fair weather.

The National Task Force for the West Philippine Sea (NTF-WPS) earlier reported that nearly a month since they were first spotted in Julian Felipe Reef, over 200 Chinese ships are now spread out over various reefs in the Philippines.

The task force on Wednesday, March 31, expressed “deep concern over the continuing unlawful presence (swarming) of the Chinese maritime militia, which did not pull out” and said that “neither the Philippines nor the international community will ever accept China’s assertion of its so-called ‘indisputable integrated sovereignty’ over almost all of the South China Sea.”

The Armed Forces of the Philippines (AFP) on Saturday joined Lorenzana in expressing “serious concern” over the continued presence of the ships in Julian Felipe Reef, which it described as an “integral part of Pagkakaisa (Unity) Banks.”

Arevalo said that the AFP has not observed any new construction in Union Banks on top of 5 past recorded constructions in the area – two by the Chinese and 3 by the Vietnamese.

“These notwithstanding, we will remain unrelenting in providing pertinent data to the DND and the NTF-WPS as to the situation that impinges on our sovereignty and our enjoyment of our sovereign rights,” he added.

Retired Supreme Court senior associate justice Antonio Carpio had warned that the continued presence of hundreds of Chinese vessels near Julian Felipe Reef could be a “prelude” to China occupying another maritime feature in the West Philippine Sea – just as it had done to Mischief Reef in 1995.

A group of scientists had warned of the possible negative implications on the fishing industry by continuous Chinese incursion in the West Philippine Sea. – Rappler.com