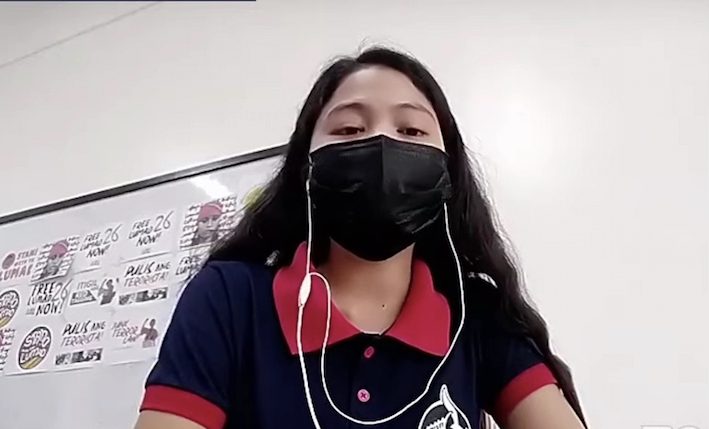 WITNESS. Teacher Roshelle Porcadilla testifies at the House commitee on justice hearing on Lumad arrests in Cebu City, on May 26, 2021.

Facebook Twitter Copy URL
Copied
‘How could we threaten her?’ says Colonel Robert Limbawan, who was chief of the Central Visayas Regional Intelligence Division at the time, as he denied the allegation

A teacher who was arrested with several others at a Lumad school in Cebu City in February claimed that Central Visayas police forced her to give up the legal services of the National Union of People’s Lawyers (NUPL)-Cebu so they can assign her a new lawyer.

Roshelle Porcadilla made the claim on Wednesday, May 26, during the House committee on human rights hearing on the arrest of Lumad students and teachers at the University of San Carlos-Talamban Campus (USC) in Cebu City.

Limbawan was the chief of the Central Visayas Regional Intelligence Division at the time. He was recently designated as Regional Mobile Force Battalion commander.

Porcadilla testified at the hearing that on March 1, she was introduced to Jeffrey Celiz who, she was told, was a former communist rebel. Celiz, a former spokesman of former Iloilo City mayor Jed Mabilog, came under the spotlight as the government’s “star witness” at the red-tagging probe of the Senate in November 2020.

The volunteer teacher claimed Celiz wrote the letter stating her supposed desire to withdraw from the services of NUPL-Cebu, and that she was documented rewriting the letter and signing it.

(Limbawan raised his voice, and I was forced to sign because I was afraid while in detention. He threatened to go to my family – he even got information about my family.)

Deputy Minority Leader Carlos Zarate said that the police choosing a lawyer for a suspect, as Porcadilla claimed, would constitute “conflict of interest.”

At the House hearing, Porcadilla announced that government-assigned lawyer Joey Borinaga would no longer be her legal counsel. NUPL-Cebu spokesperson King Anthony Perez said that Porcadilla had manifested her interest for them to legally represent her once more.

Porcadilla also claimed during the hearing that her affidavit – which she said was prepared for her based on her “almost daily” interrogations – included “many things” she “did not say,” such as allegations against fellow volunteer teacher Chad Booc. She also claimed that while she was being interrogated, she was told that she would be a state witness.

“Lahat ng sinabi niya ay hindi totoo ‘yun (Everything she said is not true) How could we threaten her?” the police officer told Rappler in a phone interview on Wednesday.

“She voluntarily changed her counsel. Nagpatabang siya ba (She asked us for help),” he added.

Limbawan claimed it was Porcadilla herself who wanted to change her lawyers because NUPL-Cebu supposedly “confused” her.

Police called the February operation at USC Talamban Campus as a “rescue” operation but rights groups called it a “raid.”

The police who conducted the operations did not have any search or arrest warrants, and said they acted on the complaints of parents, but teachers at the Lumad school said they had parental consent. During the House hearing, police said they coordinated with USC security – not the university administration – about the operation.

USC, the Society of the Divine Word, and the Archdiocese of Cebu had said in a joint statement following the incident in February that “no rescue need ever be conducted because the presence of the Lumads in the retreat house was for their welfare and well-being, and all throughout, they were nurtured, cared for, and treated with their best interest in mind.”

The seven who were arrested in February, including Porcadilla, were released from detention on May 14 after the Davao del Norte Provincial Prosecutor dismissed the charges of serious illegal detention, kidnapping, and human trafficking. The government said it will appeal this. (READ: NTF-ELCAC tries to postpone House probe on Lumad arrests) – Rappler.com

Editor’s Note: An earlier version of this story reported that the hearing was conducted by the House committee on justice. This has been corrected.