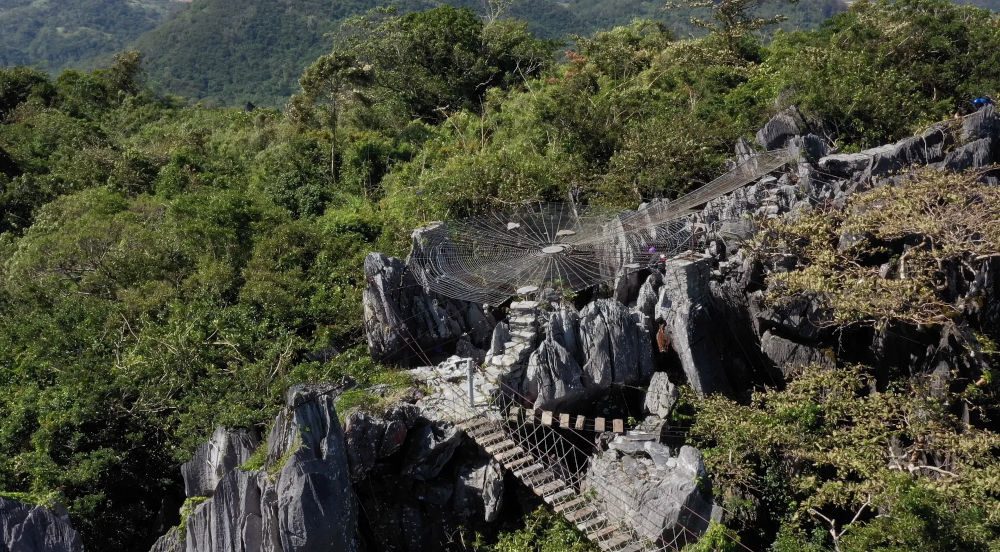 GOSSAMER. 'Sapot ni Ric' is one of the most famous spots in Masungi Georeserve, overlooking Laguna de Bay.

MANILA, Philippines – Tension eased in the Masungi Georeserve in Tanay, Rizal province after the armed group which earlier encamped near the area have moved out.

(According to them, they were just doing their job. They did not want trouble so they left voluntarily.)

The top cop, together with the secretaries of the Department of the Interior and Local Government (DILG) and the Department of Environment and Natural Resources (DENR), inspected the area and held a press briefing inside the georeserve Friday.

(There was no armed encampment in this area. What we saw were cars parked there because of a car repair shop.)

On September 17, Masungi Georeserve posted photos on social media of several vehicles deployed along the Marikina-Infanta Highway. The posts said there were armed men in the area from the Sinagtala Security Agency.

Despite the group ‘leaving voluntarily,’ Abalos said they may still revoke the security agency’s license.

“We already served notice. We can revoke the license of their security agency,” Abalos told media in a mix of English and Filipino. “You cannot deploy in areas where there are land disputes without the permission of the police. Why? It would create tension.”

Aside from the matter of the security agency, the bigger issue of land disputes within the Marikina Watershed and Kaliwa Watershed Forest Reserve still remained.

DENR Undersecretary Jonas Leones said the illegal claims in the area dragged on for many administrations, but assured the public that under Abalos and Environment Secretary Toni Yulo-Loyzaga, these issues will be resolved.

(We are reviewing everything. All the claims in this area, even those with existing tenure instruments.)

Careful investigation is needed for such complex matters, said Leones, as “what is at stake here is the country’s resources.”

However, Masungi Georeserve founder Ben Dumaliang expressed his frustration over the delayed action from the government.

Does Masungi’s management feel it is being neglected by the government?

“Definitely,” said Dumaliang. “There’s negligence. It’s time government acts. So much has been lost. And our lives are in danger.”

Dumaliang said that whenever Masungi Georeserve asked the government’s help in keeping out quarrying companies, owners of private resorts, it was Masungi’s contract that goes under scrutiny.

In its latest statement, Masungi’s management thanked Abalos, Azurin for their ‘commitment to protecting these areas.’

“Today, our forests won, like a long drought welcoming its first drops of rain.”