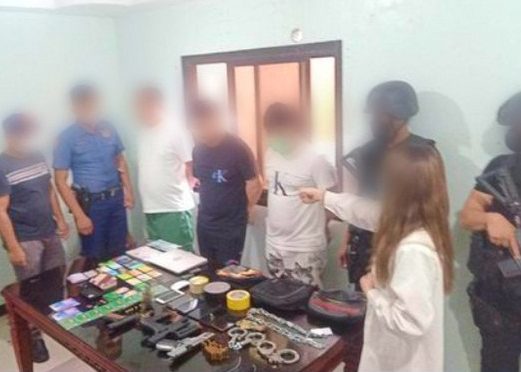 ARRESTED. The rescued victim (right) on January 5, 2022, identify the three fellow Chinese citizens who kidnapped her and held her for a month in Barangay Molino 4, Bacoor, Cavite.

Facebook Twitter Copy URL
Copied
The 28-year-old victim – a data analyst and a resident of Neijiang City in Sichuan, China – tell the police she came to the Philippines because the suspects promised her a job and a salary of P150,000

The suspects lived in Molino, where they had also kept their victim since December 5.

They were found in possession of high-caliber weapons during the joint rescue operation by the Bacoor City Police Office, the Cavite Provincial Intelligence Unit, and the Anti- Kidnapping Group under Police Colonel Frederick Eslava Obar.

The 28-year-old victim, whom the police referred to by the alias Lady Wu, is a data analyst and a resident of Neijiang City in Sichuan, China. She told the police that she came to the Philippines because the suspects promised her a job and a salary of P150,000. When she arrived, however, the suspects kidnapped her.

Two Filipinos went to inform the police on Thursday afternoon that a woman who appeared to have been held against her will had been brought to Shore Residences Tower C2 in Pasay City, and then was pulled out again by her companions.

The suspects were arrested at around 10:30 pm Thursday in the Molino house they were renting.

The police recovered the following from the suspects:

The suspects are in the custody of the Anti-Kidnapping Group.