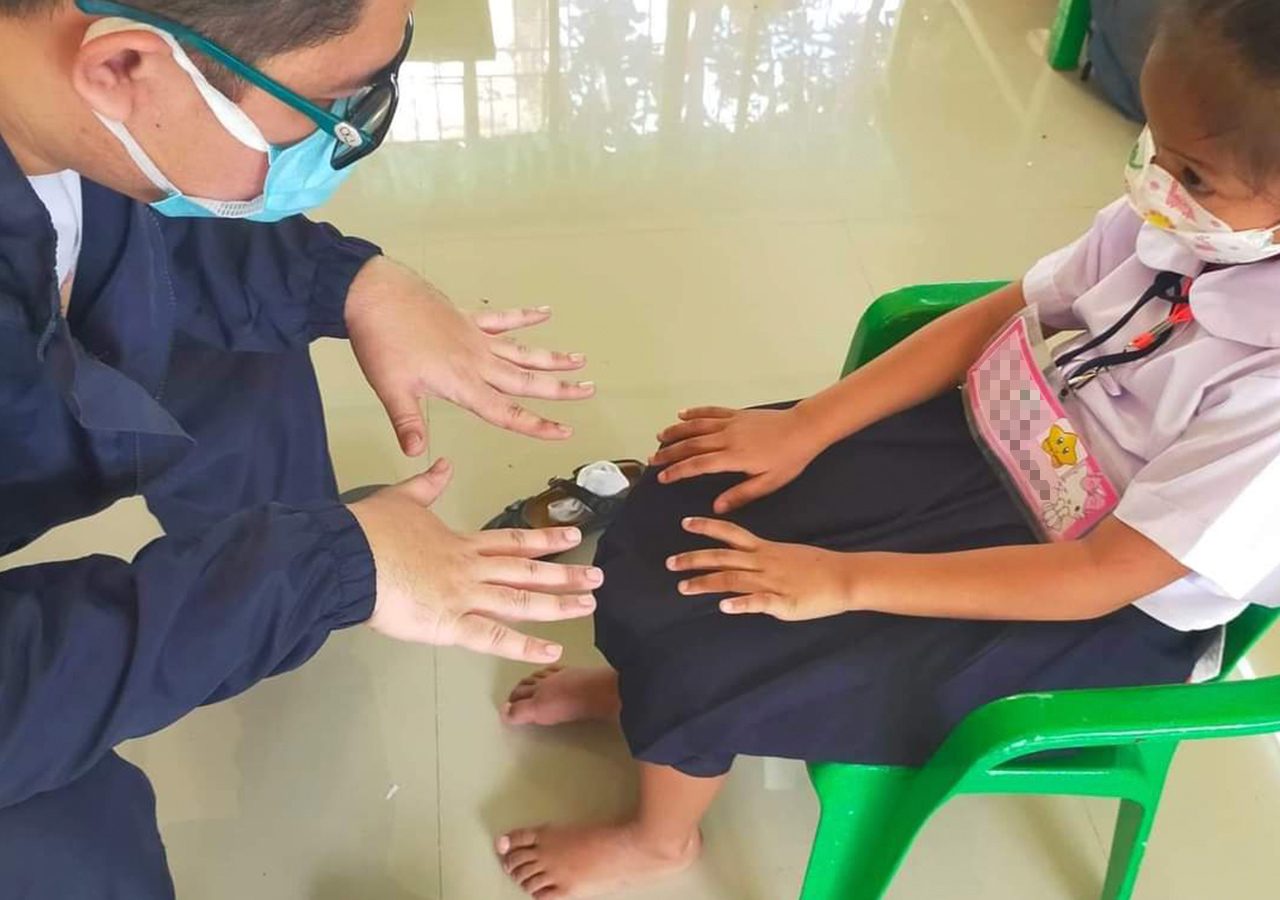 EXAMINATION. A health worker examines the hand of a young student in San Pascual, Batangas to check on possible signs of hand, foot, and mouth disease.

BATANGAS, Philippines – The Department of Health-Center for Health Development (DOH-CHD) in CALABARZON (Cavite, Laguna, Batangas, Rizal, Quezon) sent teams to schools and barangays on Tuesday, October 18, as it began an epidemiological investigation of the Hand, Foot and Mouth Disease (HFMD) outbreak in San Pascual and Cuenca towns in Batangas province.

DOH CALABARZON Regional Director Ariel I. Valencia said they have started with active case-finding, sending specimen to the Research Institute for Tropical Medicine (RITM) in Metro Manila to determine the causative agent.

Most of the HFMD cases are children in the 1- 16 years old age group and are predominantly male, Valencia said.

HFMD is a contagious viral infection that commonly affects young children and is characterized by sores in the mouth and rashes on the hands and feet. It is different from Foot and Mouth disease, which affects livestock and does not infect humans.

It is transmitted through droplets or direct contact with nasal discharges, saliva, feces, and fluid from the rashes of an infected individual.

“The results of the RITM tests, can help medical workers in the clinical management of the disease by preventing further complications,” Valencia explained.

Department of Health Officer-in-charge Maria Rosario Vergeire on October 18 said the more serious form of HFMD, though not common, could display symptoms similar to meningitis, encephalitis, or polio.

Aside from providing disinfection solutions, the DOH also distributed educational materials to keep the community aware of HFMD transmission moves and take the necessary precautions.

“We assure the public that the DOH, together with the Municipality of San Pascual, are on top of the situation, Valencia said.

Parents are encouraged to teach their children protective habits like frequent hand-washing, wearing a mask, and covering the mouth when sneezing or coughing.

Children must eat more fruits and vegetables and exercise regularly to increase their immunity against infectious diseases such as HFMD, the DOH guide said.

“There is no specific treatment for HFMD. But with good personal hygiene, regular cleaning and disinfecting of common areas or frequently touched surfaces, and avoiding close contact with someone who has hand-foot-and-mouth disease can reduce your child’s risk of infection,” Valencia concluded. – Rappler.com