HEROES. A tarpaulin honoring the five rescuers from Bulacan hangs in front of the Bulacan capitol gymnasium for the tribute ceremony of the fallen heroes on September 30, 2022.

BULACAN, Philippines – To sacrifice one’s life so that others may live is the greatest love, and this was the example given by the five fallen Bulacan rescuers.

This was how Bishop Dennis Villarojo, of the Diocese of Malolos, summed up the heroism of the rescuers who died while performing their duties amidst the fury of Typhoon Karding.

(What happened there was five people who fulfilled their duties without thinking about themselves and gave their life to serve. We consider this heroism. And according to our God’s teachings, this is what we call the greatest love.) 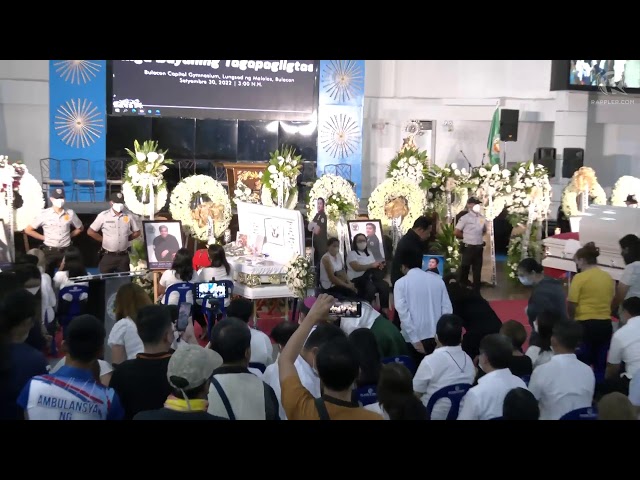 The bishop said the devotion for duty of the five sons of Bulacan reflected what was mentioned in John 15:13 of the New Testament.

(Our God told us that “no greater love than this: that when a man lays down his life for his friends.” Troy, George, Marby, Narciso Jr., and Jerson gave their lives in the highest way possible to help others.)

The five rescuers died when they were swept by flash floods in San Miguel town. Their bodies were discovered after Typhoon Karding’s onslaught.

During Friday’s ceremony, the bodies of the rescuers were brought to Bulacan’s capitol gymnasium from their hometowns – except for Jerson, because his wife requested that his body remains in their home to spend more time with him for the last time.

All the families of the rescuers were present. To also pay their respects to their fallen comrades, rescuers from other Bulacan cities and towns, and even from other regions, attended the ceremony.

In his message, Fernando said the bells of churches under the Malolos diocese will be rang simultaneously to mourn the fallen heroes. Flags in the province were also in half-mast.

Fernando also reiterated in his speech to conserve the nature, and highlighted his recent order, Executive Order No. 21-2022, which temporarily suspended mining permits and quarrying in the province.

After the ceremony, a public viewing followed that will last until October 1 – the same day George, Troy, Marby, and Narciso would be laid to rest. Jerson will be buried on October 2, according to his family.

On Friday, Bulacan provincial board announced the passing of a resolution, which honored the five rescuers. The resolution stated that posthumous awards will be given to the rescuers and their families would be given P200,000 each from the provincial government.

Aside from these, the families were also given P300,000 worth of insurance benefits from the Bulacan PDRRMO. The NDRRMC and Central Luzon regional DRRMO also posthumously awarded Batas Parangal ng Kagitingan to the five rescuers.

Bulacan PDRRMO head Liz Mungcal delivered her final goodbyes to her “sons.” She said she considered the rescuers her own children.

Representatives of each family also gave their messages to thank all those who supported them. Cesar Bartolome, Marby’s uncle, said the sacrifice of his nephew and his colleagues was meaningful because they were able to help and serve the Filipino people.

Ferdinand Calayag, brother of Narciso, said their family is still in pain because of his brother’s death. The love to serve others runs in their blood, he said, because he is a fire officer, while their other brother is a cop.

Troy’s wife, Jessa, turned emotional as she shared her feelings: “Kung puwede ko lang ibalik ’yang mga parangal na ’yan, ibabalik ko, buhayin ninyo lang po asawa ko (If I can only return all these awards in exchange of my husband’s life, I would do it).” – Rappler.com