LONG WAIT. Felino Cunanan, MAKISAMA-Tinang chairman in an interview on July 6 narrates the long process of getting recognition as an agrarian reform beneficiary.

Cunanan, leader of MAKISAMA-Tinang, died a day after a military officer in plain clothes dropped by the 93-member organization’s hut, inquiring about the group’s links to activist organizations that he tagged as supporters of the communist New People’s Army.

MAKISAMA-Tinang member Abby Bucad said Cunanan was meeting with fellow members on November 6 when he complained about a pain in his stomach before losing consciousness just before 9 am.

He was rushed to the Atanacio Hospital where doctors declared him dead on arrival.

Bucad, who was one of three companions who rushed Cunanan to the hospital, said blood had seeped out of one of his ears during the trip. Cunanan had previously been diagnosed with an abdominal aortic aneurysm, she added.

Just after the soldier’s visit on November 5, Cunanan told Bucad and other members of the MAKISAMA-Tinang that he would die fighting for their right to the land their families had tilled for generations.

He had regularly railed about the long wait for installation, a struggle punctuated by their arrest in June during an assertion activity called bungkalan.

The Capas 2nd Municipal Circuit Trial Court junked the illegal assembly and malicious mischief charges on June 27, noting that the farmers’ Certificate of Land Ownership Award (CLOA) was “sufficient proof to entitle the holder the right to possess the lands.”

The court decision followed the Department of Agrarian Reform (DAR)’s June 20 reaffirmation that 178 farmers were rightful owners of the disputed 200-hectare land.

Bucad recalled how Cunanan fretted that he would die without seeing the dawn for each of them tilling their own land, which Concepcion Mayor Noel Villanueva is also claiming on behalf of a cooperative his family controls. The stress of their struggle, Bucad said, was recently compounded by efforts to link their 34-year old fight to the communist New People’s Army, by red-tagging allied farmers’ organizations.

The sergeant who visited on November 5 asked them if Anakpawis, a former partylist group, was helping them, claiming it was a communist front organization.

“Nagkakaphobia na kami. Pilit nila dinidikit ang laban namin sa NPA, na sila daw ang tumutulong sa amin,” Bucad told Rappler in a phone interview. (We’ve gotten a phobia because they insist on linking our struggle to the NPA, that it is the NPA helping us.)

Bucad said the death of their leader would only strengthen their fight.

Cunanan will be laid to rest on Saturday, November 12. 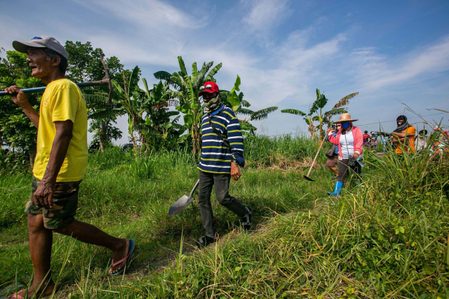