ALBAY, Philippines – Floods from heavy rain generated by the southwest monsoon rendered impassable several roads in three municipalities and a city of Camarines Sur, and in Guinobatan town, Albay on Saturday, July 30.

The southwest monsoon or hanging habagat, which is being enhanced by Tropical Depression Ester and another tropical storm outside the Philippine Area of Responsibility, dumped more rain in western sections of Central Luzon, Southern Luzon, and the Visayas on Saturday afternoon.

The Office of Civil Defense (OCD) in Bicol said that Nabua, Baao, and Buhi in Camarines Sur reported five local roads that were not passable around noon.

In the island province of Masbate, at least 10 families in Mandali village, Mobo town were left homeless when floods eroded the soil and swept away homes near the Banyadero river, the town’s largest waterway.

At least 15 other houses were also partially destroyed in Mandali village, and three each in barangays Tabuc, Tugbao and Nasundan, according to the OCD.

Claudio Yucot, the director of OCD Bicol, said that rain in Albay eased up in the afternoon but that Camarines Sur continued to experience heavy downpours.

As of 5 pm, vehicles could still not access the Barangay Sta Elena spillway (Waras River) going to Sagrada, Baao, Camarines Sur, the municipality of Nabua said.

The governor told disaster officials to observe health protocols and avoid overcrowding in evacuation centers and evacuation vehicles. He said evacuees should wear face masks, and isolation rooms should be readied for those who fall sick. He also warned against the use of COVID-19 facilities as evacuation centers.

He also ordered a halt to the multi-hazard simulation exercise in Buhi and asked the Environment, Disaster Management and Emergency Response Office (EDMERO) to give regular updates.

Villafuerte said that Iriga City also reported floods and a rise of water levels in rivers.

Officials in Iriga City told commuters to stay away from the spillway between Barangay San Jose and Sagrada village.

In Nabua town, the swollen Waras River also rendered the Sta. Elena Baras spillway impassable to all types of vehicles.

The EDMEROs of Albay and Camarines Sur have not yet released the numbers of evacuees.

But the Guinobatan Municipal Disaster Risk Reduction and Management (MDRRM) Office said that several villages in barangays Maguiron and Minto had knee-deep waters due to a river that overflowed. 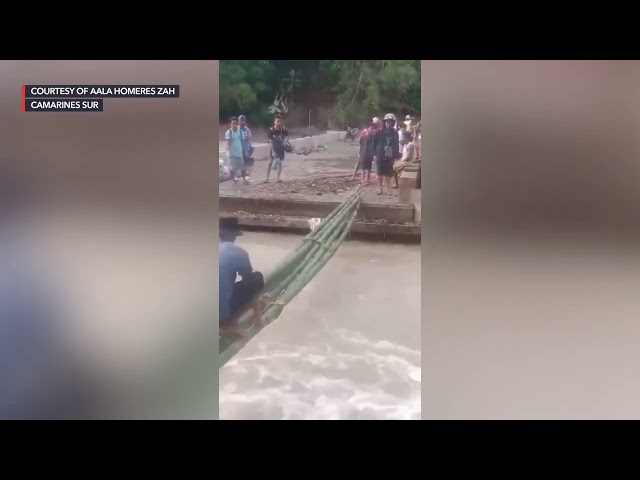 Guinobatan MDDRM officer Joy Maravillas said they called for localized evacuation within barangays to prevent any loss of lives.

The OCD said at least 14 families in Guinobatan were affected by flooding associated with lahar flow.

Gremil Nas, the spokesperson of OCD Bicol, said some volcanic debris tumbled down the slope of Mount Mayon in Barangay Masarawag, Guinobatan, Albay, but local teams managed to remove this immediately and that vehicles can use the road. – Rappler.com