None of the 6 Makabayan bloc lawmakers attended the Senate hearing on the government’s red-tagging practices, arguing that the chamber should not be used to further attack members of progressive groups like them.

In a letter addressed to Senate defense committee chair Panfilo “Ping” Lacson, the following Makabayan legislators explained their absence during the hearing on Tuesday, November 3: 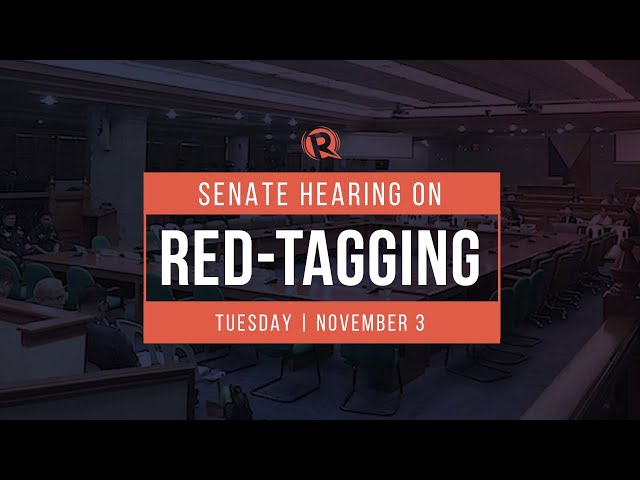 In their letter, the Makabayan bloc told Lacson that they hoped that the Senate would not allow itself to be used as a means to further red-tag members of progressive groups, as it puts the lives of their leaders and members in danger.

(We are hoping that you would not allow your committee and the Senate to be used as a launching pad for red-tagging and terrorist-tagging, a policy that United Nations Special Rapporteurs has repeatedly proven to lead to politically-motivated extrajudical killings or EJKs, trumped-up charges, and other human rights violations.)

They recalled another Senate hearing held last year which investigated claims that minors left their families to allegedly join the New People’s Army, the armed wing of the Communist Party of the Philippines (CPP).

This led to the filling of kidnapping and war crimes complaints against known activists – including Kabataan Representative Sarah Elago and former Bayan Muna congressman Neri Colmenares – over the case of a student who left home because of family problems.

The Department of Justice junked the complaints last month, as prosecutors found no link between activists and communist rebels in that case.

The military has long accused Makabayan bloc members as being front organizations for the CPP, an allegation the legislators have repeatedly denied.

Southern Luzon Command chief Lieutenant General Antonio Parlade Jr recently grabbed headlines for his persistent red-tagging of the Makabayan bloc, even admitting that the military have placed the legislators under surveillance.

But no less than Speaker Lord Allan Velasco already defended the Makabayan bloc, telling Parlade it is “uncalled for” to red-tag the duly-elected members of Congress. He challenged the military general to go to court if he actually has evidence against the legislators.

Probe turned into a ‘roadshow’

Rights group Karapatan on Tuesday afternoon lamented that the Senate hearing into a “roadshow” for the government’s red-tagging spree.

“The Senate hearing – as how it is currently being used as a platform to justify red-tagging and red-baiting or the policy and practice of baseless vilification of individuals and groups expressing critiques or dissent – is not only ill-timed: it is clear a foreboding of the things to come when the Anti-Terrorism Act is fully implemented,” Karapatan Secretary General Cristina Palabay said in the statement.

The hearing started out with Senators Grace Poe and Risa Hontiveros telling the military to improve their messaging by avoiding red-tagging. After they spoke, and with only one representative from the Makabayan bloc – their lawyer – the Senate panel heard the lengthy testimonies of the former NPA members.

Parlade’s star witness, Jeffrey Celiz, claimed that the Makabayan bloc members were all members of the NPA, as well as other prominent Leftist figures. (READ: Lawyer questions credibility of Parlade’s ‘star witness’ at Senate probe on red-tagging)

During the hearing, Parlade reiterated that he had never red-tagged actress Liza Soberano. – With reports from Rambo Talabong/Rappler.com