Makabayan wants probe into ‘Tokhang-style’ killings of activists in Calabarzon 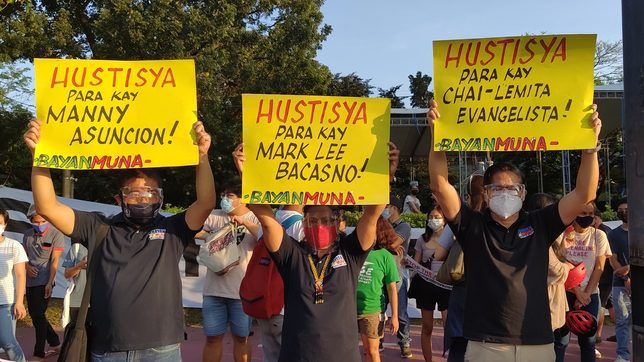 Progressive lawmakers of the Makabayan bloc condemned the “Tokhang-style” crackdown on activists in the Calabarzon region, where at least 9 were killed and 6 others arrested on Sunday, March 7.

Zarate, who is also House Deputy Minority Leader, slammed the Calabarzon police for allegedly murdering innocent civilians and for planting evidence to back their trump up cases against the activists.

“Ito ang gustong mangyari palagi ng gobyernong Duterte sa ilalim ng terror law, na araw-araw ay may madugong raid at pagtatanim ng ebidensya laban sa oposisyon at kritiko ng gobyerno (This is what the Duterte government wants to happen under the terror law, that every day there will be bloody raids and planting of evidence against the opposition and critics of the government),” said Zarate. Oplan Tokhang is a controversial police operation under President Rodrigo Duterte’s war on drugs, where cops literally knock on the doors of suspected drug users and dealers to ask them to stop their habit or trade.

Tokhang has since become synonymous to extrajudicial killings after reports surfaced of police killing unarmed suspects. In defending the killings, police officers commonly say that the suspects fought back while resisting arrest or “nanlaban.”

The killing of the activists in Calabarzon also comes months after the passage of the anti-terror law, which critics have warned will be used by the Duterte government to go after dissenters. The law’s constitutionality is currently being challenged before the Supreme Court (SC).

Kabataan Representative Sarah Elago said the President himself is responsible for the activists’ deaths since the police raids were conducted after Duterte ordered police and soldiers to kill communist insurgents in all encounters.

For Cullamat, these Bloody Sunday killings should “now prompt Congress to investigate the rampant human rights violations under the Duterte administration.”

ACT Teachers Representative France Castro then called on the SC on Monday, March 8, to “review” its rule allowing executive judges of Quezon City and Manila to issue search warrants that are valid nationwide.

“We urge the Supreme Court to review its rule allowing executive judges of Quezon City and Manila to issue search warrants valid nationwide, and the seeming complicity of several judges with human rights violations by their issuance of search warrants in violation of the Rules of Court,” said Castro.