JABS. Doses of the Sputnik V COVID-19 vaccine are checked.

The city government of Makati is turning to technology as it tries to prevent potential problems that could arise from handling hundreds of thousands of COVID-19 vaccines.

In a roundtable interview with a select group of reporters, Makati Mayor Abby Binay said her city had adopted a suite of smart technology that would ensure proper storage of the coronavirus jabs and lessen human intervention.

“The [Meraki Vaccine Distribution Solution] will help us with the vaccine itself,” Binay said on Wednesday, July 28, referring to the digital infrastructure created by IT firm Cisco for the city’s inoculation drive.

“It’s to ensure that the temperature control is maintained, that you have a CCTV camera that will monitor who brings in and pulls out the inventory of the vaccines,” she added.

Some local government units in the Philippines have grappled with vaccine spoilage since the Philippines began its COVID-19 immunization drive in March due to issues that include storage temperature changes and blackouts.

Binay said her city has not encountered storage issues but is making preemptive measures in case of such a scenario.

“Imagine if we have one million doses. The pulling out [of jabs] from the storage, and then moving it to another vaccine site [would] be a major headache if your numbers are not tabulating,” Binay said.

“Imagine if it’s hundreds of thousands already, it would be difficult to monitor. The Solution is in anticipation of the volume of vaccines that we will be receiving,” she added.

“Every time the freezer door opens, it triggers some alert,” Ilagan said, further describing how the technology works. “[Our work includes] making sure that the vaccines that the city has procured are physically safeguarded through simple IoT devices.”

Nearly five months into its inoculation drive, Makati has only administered some 281,000 vaccine doses to around 167,000 residents due to unstable deliveries from the national government. The city has yet to inoculate half of its 437,000 target population to reach herd immunity. 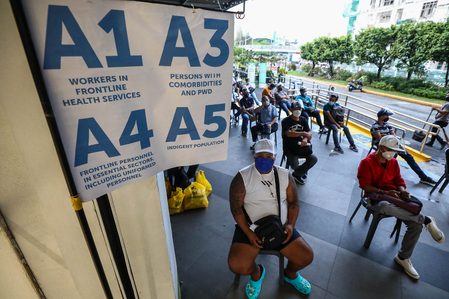 Makati, however, is waiting for the arrival of one million Astrazeneca vaccine doses that the local government procured in January to ramp up inoculations. Binay said that only less than 1% of her order has arrived in the Philippines. – Rappler.com