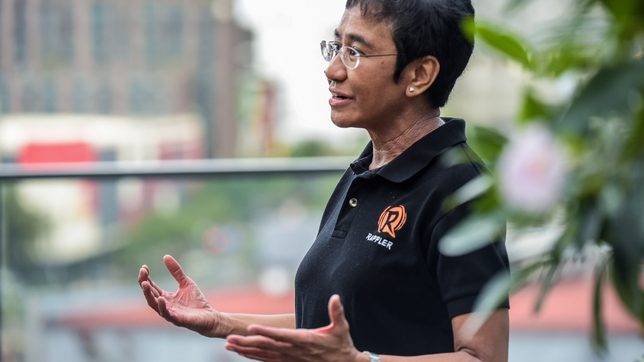 Presidential Spokesperson Harry Roque congratulated Rappler CEO Maria Ressa on receiving the 2021 Nobel Peace Prize, but denied the attacks on Philippine media that had been the premise of Ressa’s fight for press freedom.

But upon follow-up questions from the press corps, Roque was ready to flash a graphic of National Artist F. Sionil Jose’s criticism of Ressa on the victory, echoing the false narrative that there is no censorship of the press in the Philippines.

In a sweeping claim, Roque, a former human rights lawyer who once represented journalists, also said, “As everyone knows, no one has ever been censored in the Philippines.”

The Philippine House of Representatives under President Rodrigo Duterte closed down the largest television network ABS-CBN amid the pandemic, putting out of jobs more than half of its total 11,000 workforce.

Duerte would later say in a speech – but which was edited out in the public release – that “ABS-CBN ruined me. But I said, if I win, I will destroy the oligarchy of the Philippines. I did it.”

“You cannot blame Congress for not renewing the fanchise of ABS-CBN because that is one of their powers,” said Roque on Monday.

The Philippine Daily Inquirer, which almost sold to Duterte donor Ramon Ang amid harassments on the other businesses of the Prietos – said in an editorial Monday: “Along with ABS-CBN and this paper, Rappler was the target of presidential threats and attacks from the onset of the current administration.”

“Ressa has provided singular inspiration to her peers, and to all men and women of conscience resisting lies, oppression, and authoritarianism,” said the Inquirer editorial.

In congratulating Ressa, the Makati Business Club said: “Freedom of expression is under siege in the Philippines and the world from people with the power and resources to attack legitimate journalism, abuse the internet, and scare citizens into silence.”

According to data by the National Union of Journalists of the Philippines (NUJP), under Duterte, 20 journalists have been killed, four have been detained, 37 cases of libel and cyber libel have been brought against members of the media, and there have been 230 cases of varied harassments on journalists including surveillance, red-tagging, and cyber attacks.

Rappler and its journalists are still barred from going to Malacañang, or going anywhere near Duterte.

Yet for Roque, who is applying to be a member of the United Nations International Law Commission, there is no chilling effect, saying “a journalist who claims there’s a chilling effect should not be a journalist.”

Former Philippine vice president Jejomar Binay, who did not always see eye to eye with the media, said on Monday: “Press freedom has been under siege for the past five years.

“But when journalists persevere under a state of siege, it is because they choose to assert their rights, not because the administration allowed them,” said Binay.

“It is a credit to their courage and fealty to their calling. Maria Ressa’s Nobel Peace Prize is a recognition of the courage of every Filipino journalist,” Binay added.

Roque said the Nobel win “is not a slap on the government.”

“It was made by private individuals in Norway, we respect their decision, but as i said, criminal liability of Maria Ressa remains pending in our courts and we leave it to our courts to decide on her fate,” said Roque.

Ressa’s international lawyers led by Amal Clooney said “the Philippines must drop all cases against Ms. Ressa. And the world must hold the Philippines to account if it fails to do so.”

Ressa and other Rappler staff and officials face a total eight remaining active court cases that vary from libel to tax evasion to violation of anti-dummy law.