Pacquiao accused the Department of Social Welfare and Development of corruption, saying it entered into an agreement with e-wallet app Starpay to disburse social amelioration program (SAP) funds, but some 1.3 million beneficiaries were unable to get the financial assistance. 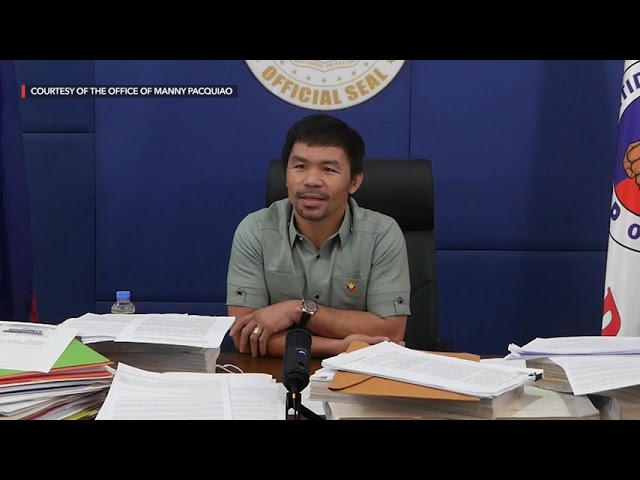 Pacquiao alleged there were P10.4 billion funds missing, as only 500,000 of the 1.8 million beneficiaries downloaded the app and claimed the money.

(For those who do not know, you cannot receive and withdraw money without downloading the Starpay app. My question is, what happened to the 1.3 million people who did not download the Starpay app, but on record were able to claim the financial aid?)

Pacquiao also questioned why the DSWD entered into a deal with Starpay when the latter had only P62,000 in paid-up capital.

He, however, refused to divulge additional information. He only said he has a credible witness and that he would file a Senate resolution next week urging the blue ribbon committee to probe into the alleged corruption in DSWD and other agencies.

In a statement released Sunday, July 4, DSWD said it is “willing to face any investigating body and present the necessary evidence and other relevant documents to clarify the allegations…. In fact, the agency has attended several Congressional hearings relative to the SAP implementation.”

The department explained that it worked with the Bangko Sentral ng Pilipinas in choosing Financial Service Providers (FSPs) such as Starpay for distributing the second tranche of the SAP. It also said it had already terminated the services of the FSPs last April 2021 and has since conducted manual payouts for the unserved second tranche beneficiaries.

“The FSPs, including Starpay,” the department stated, “liquidated the budget that they received and refunded the amount for the unserved beneficiaries to the DSWD.”

Pacquiao also accused the Department of Energy of corruption for entering into an alleged questionable agreement with the Independent Electricity Market Operator of the Philippines (IEMOP).

Pacquiao claimed there was no bidding held and that IEMOP allegedly had a paid-up capital of only P7,000.

He further claimed that in just a year, the company’s worth has ballooned to billions. He, however, did not give further information.

Pacquiao denied the role of politics in his revelations, saying it just so happened that the complaints surfaced at this time.

Pacquiao earlier drew the ire of President Rodrigo Duterte, the party chairman, after the senator – his former staunch ally – lamented corruption in government. An irked Duterte dared Pacquiao to name these corrupt officials, or else he would campaign against the boxing champ.

Now, the senator repeatedly said he is not against Duterte and was just joining the Chief Executive in his battle against corruption.

(I still have respect for the President. Maybe he does not understand it or maybe he is receiving wrong information. I just want him to know that I am not fighting with him. In fact, I am helping him uncover corruption.)

Senator Aquilino “Koko” Pimentel III, executive vice-chairman of the party, also slammed Cusi for his secret efforts to divide PDP-Laban and give party support to an outsider in the 2022 presidential elections. Marlo Tabac, the president of the PDP-Laban Council in Cagayan de Oro, had claimed that the pro-Sara Duterte faction of the party would move for the ouster of Pacquiao.

This has split the party, which is preparing to hold its national assembly on Saturday, July 17. – Rappler.com