MANILA, Philippines – Senate Majority Leader Juan Miguel Zubiri, who earlier endorsed presumptive president Ferdinand Marcos Jr. during the campaign, gave assurances the chamber would be independent should he become the next Senate president.

Zubiri, one of the top contenders for the most plum post in the Senate, told reporters on Monday, May 23, that he would be giving all senators an equal chance to push for advocacies and air their grievances regardless if they are part of the majority or minority bloc in the 19th Congress.

“We will make sure that we will never stifle the individual senator’s advocacies, his right to raise issues, stand up on the floor. We will protect the institution of the Senate by recognizing its traditions, its rules, number one, its rules…and the independence of the institution,” said Zubiri in a chance interview. 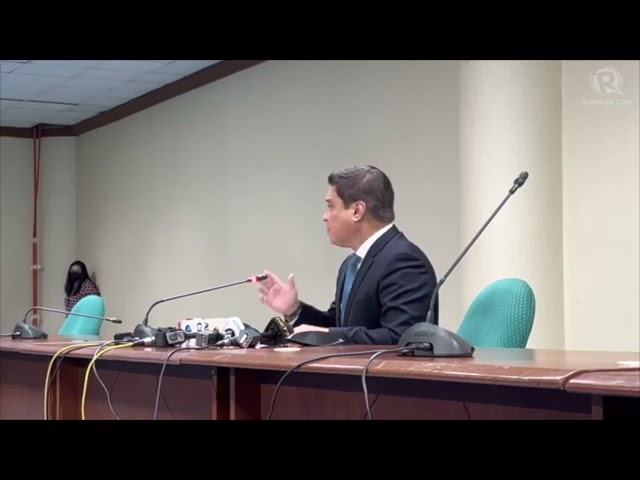 “So we will continue that tradition. And as I said, patas lahat. Lahat ng senators ay patas. Walang favoritism (And as I said, it would be fair to all. All senators would be equal. No favoritism), whether you’re in the majority or the minority,” he added.

Zubiri is emerging as one of the two frontrunners for the Senate presidency along with Senator Cynthia Villar, who has been eyeing the post ever since she topped the senatorial elections in 2019.

During the 2022 campaign period, Zubiri publicly supported Marcos and insisted the presidential bet would not be a dictator like his father Ferdinand Marcos. The 21-year rule of the elder Marcos was marred by rampant corruption, killings, torture, disappearances, and media oppression.

Zubiri drew flak for publicly endorsing Marcos and he was later booted out of the senatorial slate of Vice President Leni Robredo, Marcos’ rival.

Zubiri said talks between his group and the bloc backing Villar continued on Monday.

The Senate majority leader said he does not want to ruffle any feathers because once a new Senate president is elected by July, both blocs would eventually end up in the so-called “supermajority” in the chamber.

“Basta ‘yung grupo ni Mamshie Cynthia tsaka ‘yung grupo namin (The group of Mamshie Cynthia and my group) will eventually be part of the supermajority. So we don’t want to ruffle any feathers. We will discuss it like discerning adults and hopefully we come up with a conclusion on who will lead the supermajority for the next Congress,” said Zubiri.

He said lines between him and Villar have stayed open so far. Zubiri also called Senator Ronald “Bato” dela Rosa his friend even if he described the former top cop-turned-senator as Villar’s “campaign manager.”

Other senators eyeing the Senate presidency include reelectionist Win Gatchalian and returning senator Francis “Chiz” Escudero. Escudero, however, is part of Zubiri’s bloc.

(Chiz and I are not enemies. We’re part of the same group. Eventually our group will decide who will be leading our bloc. I leave it at that.)

Zubiri also rejected speculations of possibly having a term-sharing agreement with Villar.

“Let’s not comment about term-sharing, who’s going to lead. I don’t want to jinx anything,” said Zubiri.

In the House of Representatives, Alan Peter Cayetano of Taguig City and Lord Allan Velasco of Marinduque had a term-sharing agreement for the speakership. But things turned sour after Cayetano refused to follow their gentleman’s agreement, forcing the Velasco bloc to oust him in 2020.

An aspiring candidate for Senate president must get at least 13 votes among the 24 members of the chamber to secure victory. Senators will be electing their new leader when the 19th Congress opens session for the first time on July 25. – Rappler.com