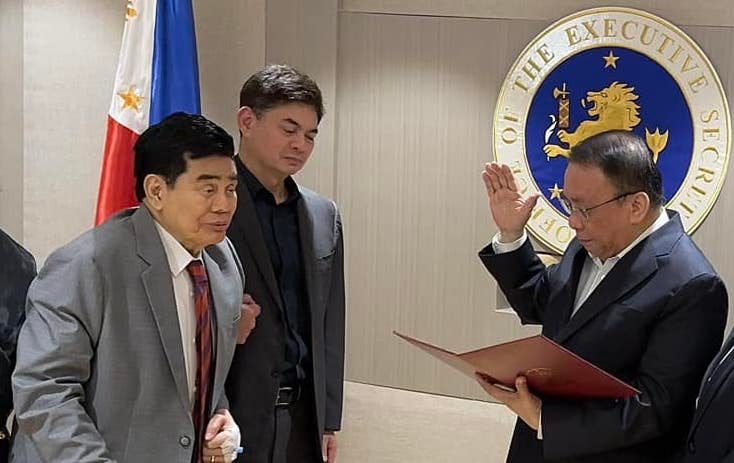 OATH-TAKING. Dante Tinga (leftmost) takes his oath as acting chairman and board member of the Development Bank of the Philippines in Malacañang on December 22.

The appointment, dated December 9, was coursed through the Department of Finance, which supervises the government-owned bank.

Tinga took his oath on Thursday, December 22, in Malacañang before Executive Secretary Lucas Bersamin, who was a former SC chief justice.

The DBP is the country’s premier government financial institution for the national government’s key development programs, among them, the development of economic zones and the funding of infrastructure projects.

Marcos and his congressional allies were most recently pushing for a sovereign wealth fund named Maharlika Investment Fund to be financed by both the DBP and the Landbank of the Philippines, another government-owned bank.

Tinga, 83, was SC associate justice from 2003 to 2009 but his life has not just been entirely tied to the judicial bench.

He was also a former member of the House of Representatives for the lone district of Taguig-Pateros from 1987 to 1998. In the 2022 polls, he tried again to be part of Congress by being the first nominee of the newly-created Silbi Partylist, but the group failed to secure even a single seat.