MANILA, Philippines – Arsenio Balisacan is returning as director general of the National Economic and Development Authority (NEDA), which he headed under the late former president Benigno Aquino III.

Presumptive President Ferdinand “Bongbong” Marcos Jr. told a press briefing on Monday, May 23, that he had asked the economist to return to NEDA. Marcos’ spokesperson said later on Monday that Balisacan had accepted the offer.

“I’ve asked him to return to NEDA. I’ve worked with him extensively at the time when I was governor. We have very similar thinking in that regard kaya’t malakas ang loob ko (I’m confident about it), I know he’s very competent, I know his policies are policies that will be for the betterment of our country,” said Marcos.

He will replace Karl Chua, an appointee of outgoing President Rodrigo Duterte.

Two other officials who had served in previous administrations have also accepted Marcos’ offer to join his Cabinet. Bienvenido Laguesma is returning as labor secretary, the post he occupied under former president Joseph Estrada. Susan “Toots” Ople will be the secretary of the newly created Department of Migrant Workers. She had served as labor undersecretary under former president Gloria Macapagal Arroyo. Ople, a longtime advocate of migrant workers’ rights, is also a daughter of the late labor minister Blas Ople under the first Marcos regime.

Balisacan was head of NEDA beginning 2012 under the Aquino presidency, until he resigned in January 2016 to head the then-newly formed Philippine Competition Commission, a post he occupies to date. Balisacan was dean of the University of the Philippines (UP) School of Economics.

He had worked as an economist at the World Bank before moving back to become a professor of economics at UP Los Baños. Balisacan also briefly served as agriculture undersecretary under the Arroyo administration, which made him the Philippines’ chief negotiator for agricultural affairs to the World Trade Organization.

In a statement issued later, Balisacan said that after a six-year stint as head of the Philippine Competition Commission, he would be joining Marcos’ Cabinet “mindful of the immense work needed to accelerate economic recovery and post-recovery development.In returning to a post I have previously held, we rely on experience and judicious reckoning of socioeconomic issues to build stronger foundations for a more robust, more inclusive, and more resilient Philippine economy.”

He added, “In fulfilling this new role, I look forward to working with the economic team and the private sector to bring back the country to its pre-pandemic high-growth trajectory, deliver rapid poverty reduction, and reduce socioeconomic inequality.”

The choice of Balisacan “is interesting, but there’s no question that Dr. Balisacan has the expertise and experience needed as he reprises his roles as NEDA director-general and socioeconomic planning secretary,” said JC Punongbayan, assistant professor at the UP School of Economics and Balisacan’s former head executive assistant in NEDA.

“We can be assured that NEDA will be in good hands” said Punongbayan, “but very soon Dr. Balisacan and Marcos Jr. will have to come up with a solid and comprehensive economic plan in order to allay the anxieties of the business sector and address the myriad challenges faced by our economy, including rising inflation, record debt, and the need to bring back long-run GDP to its pre-pandemic levels.” No finance chief yet

The NEDA director general is crucial since he crafts the country’s development plans, which will guide the entire government in the coming years. Meanwhile, the socioeconomic planning secretary also serves as the president’s top economic adviser – a role that’s especially crucial now that the economy is beset with many pressing problems left and right.

NEDA is responsible for the country’s socio-economic roadmap. It also wields great power in evaluating infrastructure projects. When the pandemic hit, NEDA was in charge of the economic recovery plan, analyzing the impact of lockdowns.

Marcos still did not name his choices to be finance and budget secretaries, who make up the economic managers. Calls have mounted to name an economic team to allay investors’ worries.

“Allow me the luxury of a few more days and we will be able to announce more,” said Marcos in a statement made to the media.

“I still have to talk to some of our proposed nominees and we have to understand na nagkakasundo kami sa polisiya kasi kung hindi naman sila mag-a-agree ay mahirap naman masyado ‘yun (that we are aligned on policies because if we do not agree, then that’s going to be difficult), so we will continue to discuss with them,” said Marcos. 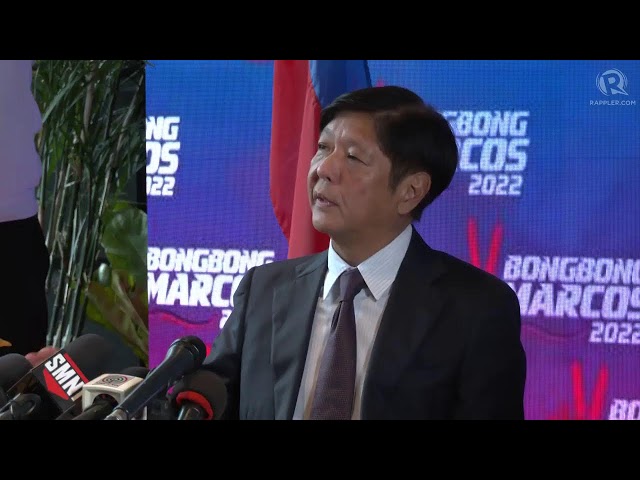 In his brief press conference, Marcos entertained three questions: where he will hold his inauguration, his views on the Indo-Pacific regional cooperation, and the proposed additional stimulus package.

House Majority Leader Martin Romualdez, who is being pushed to become the next House Speaker, earlier said that a priority legislation of the Marcos government would be a stimulus program. But how to fund it, considering the 2022 national budget has already been allotted?

“Although it has been disbursed, not all of it has been spent, so meron pa tayong breathing room pero konti na lang (we have a breathing room, but it’s not so big) and so that’s why we will have to look at the new budget, the budget for 2023 which is presently being written,” said Marcos

Ambassadors of South Korea, India, Japan and the United States chargés d’affaires paid courtesy calls on Marcos Monday morning. The Indian Ambassador, the only one who granted an interview, said China was not at all discussed during their meeting. – Rappler.com