MANILA, Philippines – President-elect Ferdinand “Bongbong” Marcos Jr. prefers a clean start for his incoming government, including erasing the past – either of his family or even the corrupt past of the notorious Bureau of Customs (BOC) and the Bureau of Internal Revenue (BIR).

(Corruption? Let’s forget about the past. Let’s say, that’s not under my watch, that’s not me, I wasn’t the leader before. Now, it’s me, so that should stop.)

Marcos said this in a press conference open only to three select media outfits.

In a briefing open to all Thursday afternoon, incoming Press Secretary Trixie Cruz-Angeles clarified that it wouldn’t mean that officials with pending corruption cases will be cleared.

“Pending cases will continue because they’re pending. I think the approach, as he had expounded in previous interviews, is simply not to concentrate too much on fault-finding, not in the sins of the past, because in his words, and I quote, ako na ang namamahala ngayon (I am the one who’s in charge now),” said Angeles.

Angeles added, however, that it’s a policy that needs to be ironed out later on.

The very first executive order of the late former president Benigno “Noynoy” Aquino was to create a truth commission to investigate corruption in the government of his predecessor, Marcos’ ally Gloria Macapagal-Arroyo. The commission was declared unconstitutional by the Supreme Court in the same year it was created.

Marcos added that he is open to the style of ousted former Malaysian prime minister Mahathir Mohamad of sidelining corrupt officials. 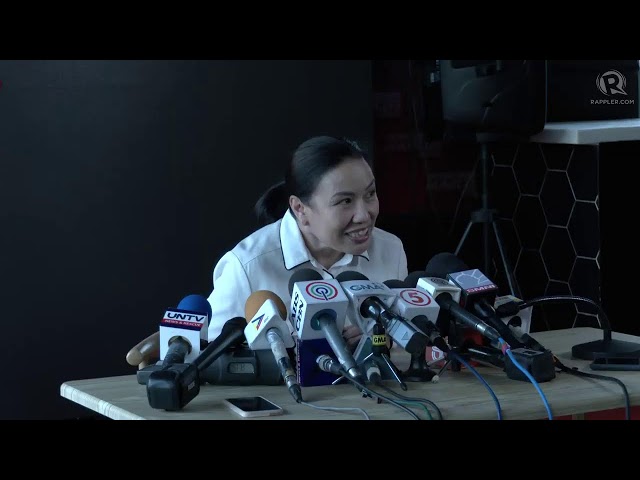 ‘I changed my mind’

Marcos has still evaded burning questions about the spotty history of his family, including their unpaid estate tax that might have already reached P203 billion, and stolen wealth that is still being recovered by the Presidential Commission on Good Government (PCGG).

Angeles was critical of the Marcoses before, saying in a tweet in 2013 that “true justice is when we see at least Imelda Marcos in jail.” In another tweet in 2016, Angeles blasted the hero’s burial given to the late dictator Ferdinand Marcos, saying she “hates the idea.”

Angeles, a product of the premiere University of the Philippines (UP) College of Law, said she simply changed her mind.

“Aren’t people entitled to change their minds? I think we are di ba? I think evolution is a natural thing even in our consciousness….,” Angeles began to explain, until she was cut by Marcos’ media officers and they directed her to take another question.

Marcos said on Thursday that during a previous meeting with outgoing President Rodrigo Duterte, he was told to continue the drug war in “your own way.”

“One thing that he was very assertive about was ‘Ituloy mo ‘yong anti-drug [campaign] na sinimulan ko. Do it your own way.’ He really said that. ‘Do it your own way. Palitan mo, gawin mo ‘yong gusto mo pero huwag mong iiwanan ‘yan kasi kawawa ang kabataan natin,” said Marcos.

(Continue the anti-drug campaign that I started. Do it your own way. He really said that. Change it, do what you like but don’t stop it because I really pity our youth.)

Marcos already said during the campaign that he intends to continue the drug war, but would change it so that it has a bigger focus on the health aspect of it, and to target the big drug lords instead of the small time drug peddlers. Duterte’s bloody drug war has killed an estimate of 27,000 people, 7,000 of whom were killed in legitimate police operations. It is being investigated by the International Criminal Court for alleged crimes against humanity.

No SolGen in mind

Crucial to his incoming government would be his appointee to the PCGG and the Office of the Solicitor General (OSG) because both agencies are under his executive department, and both would have consequential roles in the pending cases against his family.

The PCGG is the complainant in all cases against the family, and the OSG sometimes defends the government’s cases. In many cases, it’s the Office of the Ombudsman, but Jose Calida – a Marcos loyalist and Marcos Jr.’s 2016 campaigner – has shown how powerful the OSG can be if the head so wishes.

Under Calida, the OSG has run after all types of dissenters, whether members of the political opposition, the Left, or critical media.

Both the PCGG and OSG can move to withdraw the cases. Imelda Marcos is still appealing her conviction for seven counts of graft for opening illegal Swiss entities where stolen wealth was coursed through. The president-elect and his sisters Imee and Irene were named beneficiaries of these entities. They have also never directly addressed this issue.

On Thursday, Marcos was still unable to name his Solicitor General. He was confused at first what “SolGen” meant, short for the post.

“Ah, Solgen sorry I did not understand. Marami din eh, ang daming magagaling (There’s a number, there are a lot of brilliant ones), we are lucky that…some of the legal luminaries have expressed their willingness to join the government, and that is one of the offices we are looking at,” said Marcos.

No one asked in the briefer who he’s looking to appoint to head the PCGG. – Rappler.com