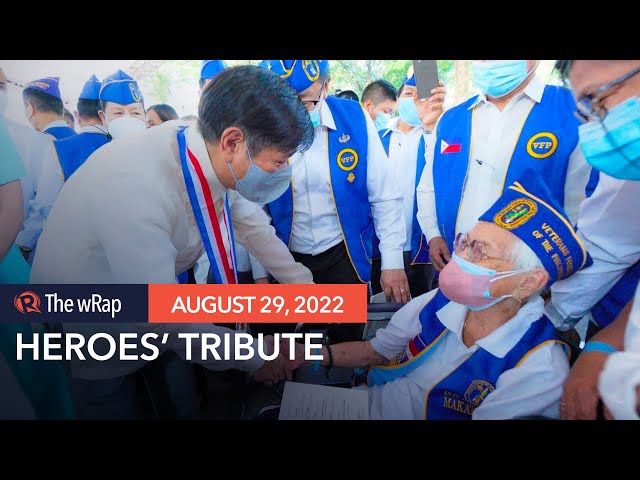 MANILA, Philippines – At the cemetery where his late father and namesake was given a rushed hero’s burial years back, President Ferdinand Marcos Jr. on Monday, August 29, paid tribute to the “great heroes of our nation.”

(We also fervently remember the sweat, blood, and lives they sacrificed for our sake, our freedom, and our future. Because of their sacrifice, the burdens we and our society have borne have become lighter.)

The President, who is also agriculture secretary, honored workers from the agriculture and industrial sectors. Marcos also paid tribute to educators, healthcare workers, the country’s uniformed services, barangay officials, community leaders, and overseas Filipino workers, in his speech in Taguig.

(This is a time for us to consolidate our strengths and prepare for the fast and certain recovery of our economy. We must trust that a safer and more progressive future awaits all of us. History has shown us that it is our collective strength that will make us succeed.)

The line was a reference to Marcos’ key promises post-victory: of recovery from the economic hardships after years of lockdown because of COVID-19.

Marcos also used the speech to promote the government’s vaccination booster drive and reiterate his State of the Nation Address promise to open specialized hospitals and health centers in regions and provinces outside of Metro Manila.

On Monday, Marcos promised to open hospitals for veterans in the Visayas and Mindanao.

National Heroes Day is a national holiday that’s been celebrated since the American occupation. Originally celebrated during the last Sunday of August, it was moved to the last Monday of August under the presidency of Gloria Macapagal-Arroyo.

According to the Official Gazette, National Heroes Day “specifies no hero; the law that put into practice the celebration does not name a single one.”

“The lack of specifics offers an opportunity to celebrate the bravery of not one, not a few, but all Filipino heroes who have braved death or persecution for home, nation, justice, and freedom,” reads the write-up from the country’s official journal.

The question of what makes a hero became part of the national narrative and the Philippine news cycle in 2017, when, with the support of then-president Rodrigo Duterte, the remains of Ferdinand E. Marcos were moved from Ilocos and buried at the Libingan ng mga Bayani.

The remains of the late strongman were laid to rest at the prestigious cemetery in 2016, months into Duterte’s presidency. A hero’s burial was among the promises of Duterte when he was campaigning in the 2016 presidential race.

To this day, groups and individuals – especially those who were victims of Martial Law under the first Marcos president – insist the late dictator does not deserve a place at the Libingan ng mga Bayani.

His father’s legacy – including his infamy – is something the current President has both embraced and stayed mum about, depending on the situation.

The Palace was notably silent on August 21 or Ninoy Aquino Day, a holiday dedicated to remembering the late Ninoy Aquino, a prominent opposition figure during Martial Law under Marcos.

In some speeches, Marcos Jr. has made references to his father or the projects he championed. The promise to create specialized health centers in the regions and provinces, for instance, links to his late father’s pet projects: the Heart Center and the Lung Center of the Philippines. On the campaign trail, it was Marcos’ allies who made explicit promises that the son would continue the father’s legacy.

There were no mentions of his father during the August 29 speech.

(Let us use our capabilities to renew our world, for the betterment of all. May we not allow ourselves to be slaves of division and a crab mentality. Instead, may we be instruments of unity and peace.)

Marcos won the 2022 presidential elections by a landslide and is the first majority-elected president in the post-Martial Law era. Vice President Sara Duterte, concurrent education chief, is Marcos’ key ally and his 2022 runningmate. She is the daughter of Marcos’ immediate predecessor.

In a separate statement, Vice President Duterte drew on the “patriotism” of Filipinos who came before us, while blasting the “acts of hostilities” from “anti-people, anti-government” forces.

“The blood of our National Heroes is the same blood of bravery, selflessness, and love of country and fellowmen that continues to flow across the nation today – now permeating into the minds and hearts of many Filipinos who have committed to the cause of rebuilding the nation from the rubbles caused by disunity, hatred, misunderstanding, and acts of hostilities perpetuated by anti-people, anti-government, and local terror groups that hostaged the progress of the country for a long time,” she said.