NEXT PRESIDENT. President-elect Ferdinand Marcos Jr. speaks to the media after meeting with various diplomats at the Uniteam Headquarters in Mandaluyong City on May 23, 2022.

Facebook Twitter Copy URL
Copied
'There is no wiggle room there. Our sovereignty is sacred. We will not compromise it in any way,' President-elect Ferdinand Marcos Jr. says 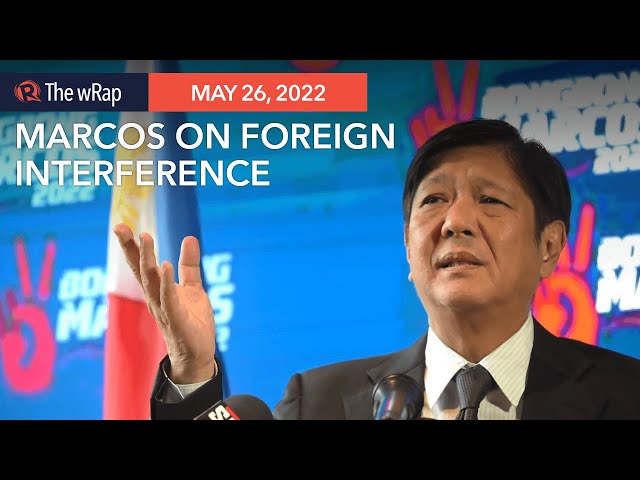 MANILA, Philippines – Philippine President-elect Ferdinand Marcos on Thursday, May 26, promised to prevent any foreign interference in the running of his country, and to defend sovereign territory and stand up to any Chinese encroachment in the South China Sea.

In his strongest comments yet on how he will handle ties with China, Marcos, who takes office on June 30, said he would resist challenges from Beijing and stick to the 2016 ruling of an international arbitration court that made clear the Philippines’ economic entitlements.

“There is no wiggle room there. Our sovereignty is sacred. We will not compromise it in any way,” Marcos said in an interview with his new press secretary, which was shown on his Facebook page.

“We are a sovereign nation with a functioning government. We do not need to be told by anyone how to run our own country,” he said.

“There is no room for negotiation there. It is sacred, inviolable.”

Marcos, the son of the dictator ousted by a 1986 people’s revolt, said he would not allow any of the archipelago nation’s vast coastline or its 200 nautical mile exclusive economic zone to be infringed.

“How do we do this? We talk to China consistently with a firm voice,” Marcos said.

The 64-year-old, who swept this month’s election with 59% of the vote, is expected to lean towards China and last week promised to elevate and expand their ties to a new level during a phone conversation with President Xi Jinping.

However, a pro-China stance could complicate the close relationship with historic ally the United States, a key source of defense and diplomatic support that has long been popular among Filipinos and the military.

China’s embassy in Manila did not immediately respond to a request for comment.

Marcos said his administration would have an independent foreign policy and recognized that international partnerships were key to a stable region.

“Not only economically but geopolitically, as we emerge from the pandemic and the crisis it brought, we have to form alliance and partnerships,” he said.

“No country can change the geopolitical situation on their own. And those are the partnerships that will keep things stable.” – Rappler.com