Key officials in Indonesia welcome President Ferdinand Marcos Jr. and First Lady Liza Marcos as they arrive in Jakarta. Office of the President/Facebook

Facebook Twitter Copy URL
Copied
'These kinds of discussion, especially with the West Philippine Sea, I'm hoping to do that with the Chinese President,' says President Ferdinand Marcos Jr.

Philippine President Ferdinand Marcos Jr. said on Wednesday, November 9, that he’s keen on bringing up the country’s position on territorial disputes in the West Philippine Sea during the Association of Southeast Asian Nations (ASEAN) Summit in Cambodia and, more importantly, in a future discussion with Chinese President Xi Jinping.

“I think the Code of Conduct is medyo natutulog eh (has not moved forward), it’s not really moving forward. Maybe we can [talk about the West Philippine Sea] using that, the Code of Conduct,” said Marcos in a chance interview with media on board PR001 en route to Phnom Penh, where the 40th and 41st ASEAN Summit will be held. 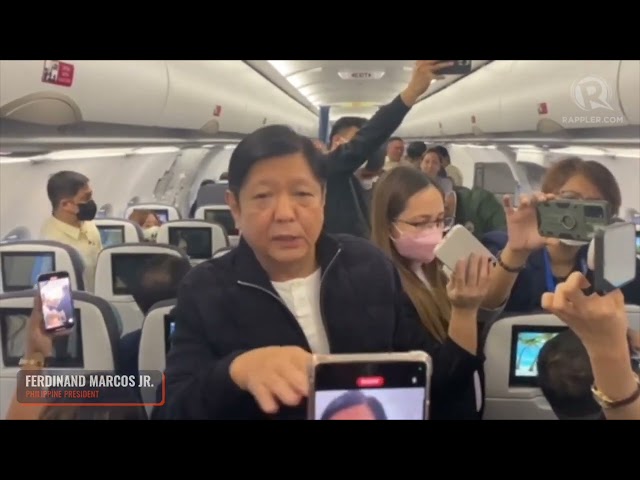 Marcos, who is attending a regional summit for the first time as head of state, said creating a Code of Conduct between ASEAN and China is key. The problem is, there is none.

“The problem is that ASEAN has many different positions also. That’s the first part, if we’re going to come up with a Code of Conduct, we have to come up with the same position,” he added.

ASEAN is composed of 10 member states in the Southeast Asian region. The Philippines is among the founding members, alongside Indonesia, Malaysia, Singapore, and Thailand. Membership has since included Brunei, Vietnam, Laos, Myanmar, and Cambodia. Timor Leste is an observer state but has yet to be granted membership into the group, considered among the key geopolitical entities in the region.

But ASEAN’s strength is also its pitfall. Consensus from all members must be reached for it to issue any position or statement.

Several members of ASEAN have disputes with China over areas in the South China Se, although their approaches and tactics differ.

But Marcos wants a more direct approach when it comes to West Philippine Sea or South China Sea disputes: a discussion with his Chinese counterpart.

The Philippine President has yet to meet Xi, although he had earlier extended his congratulations over securing a historic third term in power.

The Philippines’ relations with China have been through many ups and downs. In the administration of the late Benigno Aquino III, relations turned icy as his administration led the charge and won an arbitration ruling before an international tribunal.

Marcos, thus far, has taken a different path. During a recent working visit to the US, Marcos had overt pledges to strengthen Philippine-US ties. He had said that he’s open to all approaches when it comes to the West Philippine Sea, be it via multilateral or bilateral talks. – Rappler.com