ON BOARD. President Ferdinand Marcos Jr. gives media a quick interview on board the plane en route to Phnom Penh on November 9, 2022. Photo by Bea Cupin/Rappler

PHNOM PENH, Cambodia- President Ferdinand Marocs Jr. Is set to meet with his counterparts from Canada and France on the sidelines of the Association of Southeast Asian Nations (ASEAN) Summit in Cambodia.

Marcos made the confirmation on Wednesday, November 9 in a chance interview with media on board PR001 en route to Phnom Penh.

Marcos said his meeting with Canadian Prime Minister Justin Trudeau would likely be an “introductory” talk. With French President Emmanuel Macron, whom he has met with informally in the past, Marcos said  energy and climate change will likely be among the topics of discussion. 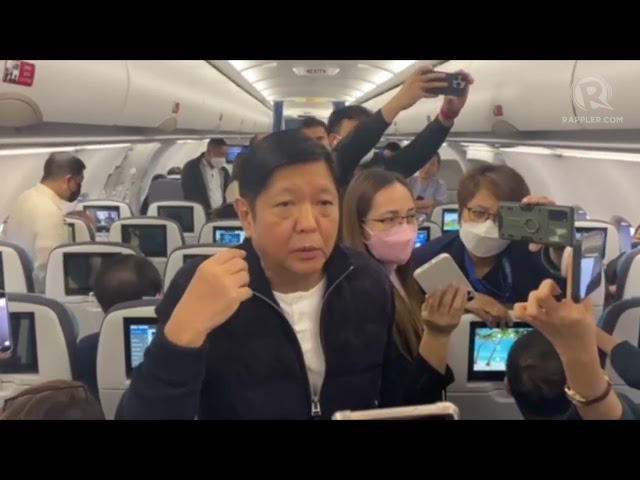 France is trying to put together a coalition on climate change under the auspices of the UN.

The Department of Foreign Affairs (DFA) had earlier confirmed that Marcos would be meeting with the Cambodian head of government, as courtesy to the chairman of the ASEAN Summit. They also confirmed a planned meeting with South Korea.

Marcos had earlier held bilateral meetings with US President Joe Biden and Japan Prime Minister Fumio Kishida on the sidelines of a working visit to New York for the United Nations General Assembly.

He has also had state visits to Indonesia and Singapore.

The Philippine President will be participating in the 40th and 41st ASEAN Summit in Cambodia, from November 10 to 13. He arrived in Phnom Penh on November 9.