Thousands of individuals supporting the presidential run of Ferdinand Marcos, Jr. in Ilocos Sur had what they dubbed as “the longest motorcade” in the country on Sunday, November 7, reportedly spanning more than 125 kilometers.

Lead organizer and Bongbong Marcos Ilocos Sur Advocate (BBM-ISA) coordinator Kervin King said not less than 5,400 vehicles participated in the activity. He added about 80% of these were motorcycles. 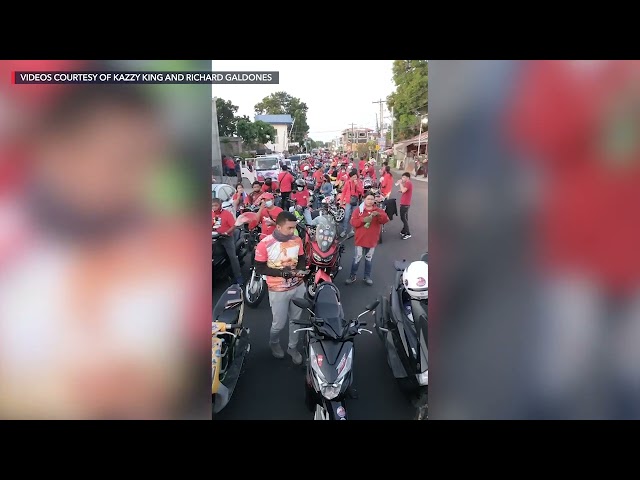 Efren Rafanan, a provincial board member and one of the organizers of the event, said the caravan lasted for 6 hours – from 6 am until 12 noon.

Rafanan also claimed at least 8,000 supporters participated in the caravan, saying it “exceeded and doubled the expectation of 4,000 participants.”

The group started its convoy from Banaoang, Santa, where the second district contingent assembled. They then drove north and converged with the first district team in Poblacion, Bantay. From there, the motorcade moved to the northernmost town of Sinait. It turned back and drove to the municipality of Tagudin, which borders La Union province.

King said most of the first district riders stayed in Bantay on their way back. However, more vehicles joined the group that continued the motorcade on their way to Tagudin.

In Candon City, meanwhile, supporters were seen on the streets, holding and waving Philippine flags as the motorcade passed through the commercial center.

“Based on my computation, from head to tail, the length of the [motorcade] is about 27.3 kilometers. When I asked where is the tail, the motorcycle sweepers reported Northcoast Oil in Bantay, at that time, we were already at Sinait District Hospital,” King said.

King recalled that the motorcade started as a plan among friends, and it was not hard for them to call for participants for the activity.

From their plan among friends, it became a “friend inviting friends, and all of a sudden it became this big so we have to ask help from Kilusang Bagong Lipunan president Efren Rafanan for help, and we also need to coordinate with the provincial government because of the big contingent,” he said.

King said Rafanan, an incumbent member of the Provincial Board, helped them secure the needed permits for the activity.

“We did this to show Bongbong Marcos, that we, as Ilocanos can sacrifice for him. There is no need to pay us,” King said, adding the participants were all volunteers.

“We are glad that the activity went well, without accidents and we did not cause much traffic. We are thankful because our governor, Ryan Singson, was very supportive of this, including his father, [Narvacan] Mayor Chavit,” he said.

Rappler sought comment from Narvacan Mayor Luis “Chavit” Singson regarding the event on Sunday but his media officer said he declined to give a comment. – Rappler.com

Sherwin de Vera and John Michael Mugas are Luzon based journalists and awardees of the Aries Rufo Journalism Fellowship.