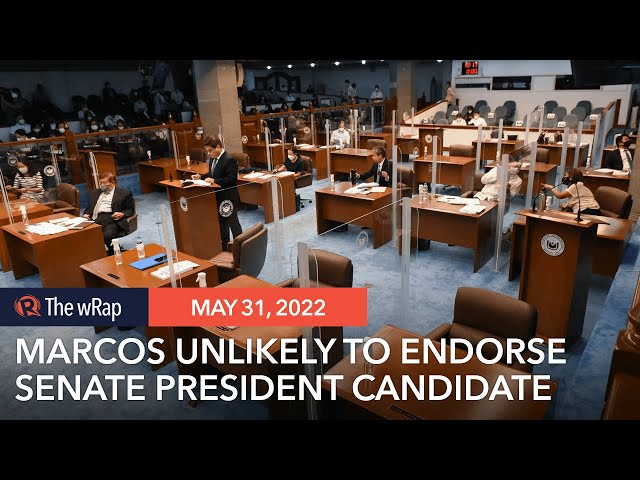 MANILA, Philippines – President-elect Ferdinand “Bongbong” Marcos Jr. would likely be hands-off in the heated race for the Senate presidency in the next 19th Congress, according to his older sister, Senator Imee Marcos.

Speaking to reporters on Tuesday, May 31, Imee doubts her brother would meddle in the fight Senate president in the next Congress, where the emerging frontrunners are known Marcos allies: Senate Majority Leader Juan Miguel “Migz” Zubiri and Senator Cynthia Villar.

“Oh, it’s most unlikely and quite improper. As you are well aware, there is separation of the three branches of government. Hindi po tayo nanghihimasok sa Executive. Ang Executive, hindi papakialaman ang judiciary and so on and so forth, kasi hindi naman siya tama, ‘di ba (We are not going to meddle with the executive branch. The executive branch won’t interfere with the judiciary and so on and so forth, because that wouldn’t be right, isn’t it)?” said Imee.

An aspiring candidate for Senate president must get at least 13 votes among the 24 members of the chamber to secure victory.

Senators will elect their new leader when the 19th Congress opens session on July 25, the same day Marcos would deliver his first State of the Nation Address as the 17th president of the Philippines.

Senators usually choose their own leader without having to seek the incumbent president’s blessing – a usual practice in the House of Representatives that is traditionally known to be more subservient to whoever is sitting in Malacañang.

An endorsement from Marcos, however, would certainly give an advantage to whoever is seeking the Senate presidency in the 19th Congress. Senators would likely gravitate towards the aspirant backed by the president-elect who was voted by some 31 million Filipinos.

Regardless of who wins the Senate presidency, however, Imee said it is important that a “supermajority” coalition be formed under her brother’s term.

“Well, I think that at all costs that we need to have a supermajority. Our country faces, with the world, a very challenging future. We need to be together. We need a Senate Uniteam,” said Imee, borrowing the name used by the Marcos-Duterte tandem during the campaign period.

Regardless who wins the race for Senate president between Villar and Zubiri, Marcos stands to benefit.

Both Villar and Zubiri staunchly supported Marcos’ presidential bid and they can thus be expected to shepherd the passage of his pet bills once he lays them down in his first SONA.

Imee herself is part of the bloc of eight senators currently backing the Senate presidential bid of Villar, who has long been eyeing the most plum post in the upper chamber ever since she topped the senatorial elections in 2019.

Imee is a member of the Nacionalista Party (NP), which is chaired by Villar. NP endorsed the Uniteam tandem of Marcos and vice president-elect Sara Duterte.

“So you always support your party mates as a general rule,” said Imee.

Dela Rosa told reporters in a separate interview on Tuesday that Villar is open to a term-sharing agreement with Zubiri.

But Zubiri had earlier declined to comment on speculations of a possible term-sharing agreement with Villar. “Let’s not comment about term-sharing, who’s going to lead. I don’t want to jinx anything,” he said on May 23.

In the House of Representatives, Alan Peter Cayetano of Taguig City and Lord Allan Velasco of Marinduque had a term-sharing agreement for the speakership. But things turned sour after Cayetano refused to follow their gentleman’s agreement, forcing the Velasco bloc to oust him in 2020.

Zubiri is claiming that he has the upper hand, telling reporters on Monday, May 30, that his bloc is the “majority of the majority.” The Marcos ally gave assurances that the chamber would be independent should he become the next Senate president.

Zubiri will likely get the support of his allies from the so-called “Seatmates” bloc in the chamber, including senators Sonny Angara, Joel Villanueva, Nancy Binay, Sherwin Gatchalian, and returning senator JV Ejercito.

Escudero, however, is also being floated as a potential contender for the Senate presidency. Gatchalian earlier expressed interest in the position, too.

It remains unclear for now who would be supported by senators-elect Jinggoy Estrada and Raffy Tulfo.

As for the Senate minority bloc in the 19th Congress, reelected senator Risa Hontiveros will automatically be part of it as the lone opposition candidate to win a Senate seat in the May polls. Senator Aquilino “Koko” Pimentel III, former Senate president, also expressed interest in joining the minority bloc.