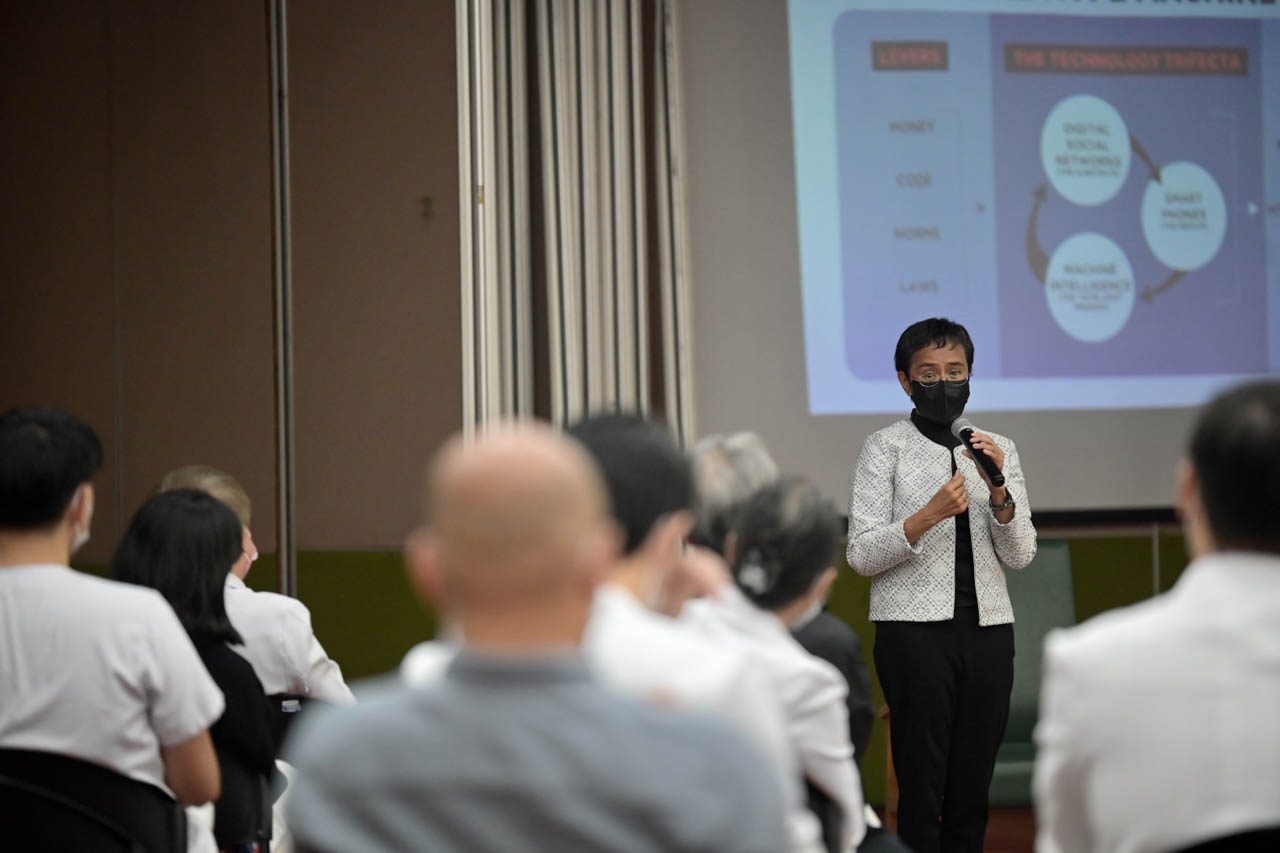 Rappler CEO and Nobel Prize Laureate Maria Ressa speaks to the medical community during The Battle For Facts forum which talks about fake news and disinformation at the Makati Medical Center on July 18, 2022. Photo by Alecs Ongcal/Rappler

MANILA, Philippines – Rappler CEO and Nobel laureate Maria Ressa emphasized that it will take a collaborative effort to win against disinformation campaigns.

Speaking to an audience made up mostly of physicians during a talk at the Makati Medical Center on Monday, July 18, Ressa reiterated how disinformation is akin to a virus of lies, which will hit a critical tipping point if no vaccine is given immediately.

When it comes to day-to-day disinformation, that may mean someone knowledgeable, an expert in a field, standing up and speaking out in order to correct a lie before it has a chance to infect many others, and before it can reach a tipping point where it’s hard to reverse the damage done of a particular piece of disinformation.

Ressa described the current information ecosystem as the “cult of the amateur” (in reference to a 2007 book The Cult of the Amateur by internet critic Andrew Keen) where “meaning has been compromised” by those who can reach the most minds the fastest, and often, the fastest means provocative, loud content regardless of whether one is an expert on the subject or not. Fake news spreads up to six times faster than the truth in social media, and reality is shaped by those who can game what the algorithms pick up.

It’s vital to correct a lie early on, especially for experts in their respective fields, whom Ressa urged to not stay quiet. One problem is that some experts begin to leave social media because they get clobbered online when they speak up against fake news and because they don’t want to deal with the attacks. When experts leave, it leads to a “ripple that is much larger,” helping fake information to spread faster as opposed to experts stopping its spread in their own personal networks or as amplified by other accounts in their network.

Ressa said that keeping this influence in our own social networks partly describes the “mesh” part of the anti-disinformation initiative #FactsFirstPH. The mesh is made up of civil groups, which amplify facts and fact-checks to combat the tide of fake news coming from coordinated disinformation campaigns.

If more experts keep exerting their influence in their own networks to debunk lies or if more civil groups amplify the facts, then the truth has a path to where it can balance out an information ecosystem that’s currently biased towards the fake.

Ressa called it a “person-to-person defense of democracy” and said that the larger we can make this interconnected networks amplifying the truth, the better our chances of winning against lies will be.

Ressa also noted how historian Ambeth Ocampo had said that history is not like tsismis (gossip) – an expert’s stance on the nature of historical study, and an answer to actress Ella Cruz’s earlier statement that history is like tsismis. Ocampo was attacked online by Marcos influencers for what he said, exemplifying how experts in their respective fields can be silenced by an opposing network.

“There’s almost no incentive for anyone to stand up for the truth,” said Ressa, but not standing up for it, not exerting our own personal expertise in our own networks, and leaving our networks to avoid attacks are only to the further advantage of fake news.

A bigger mesh, which again is each of us amplifying facts in our networks, means a bigger net to stop the fake from spreading. – Rappler.com