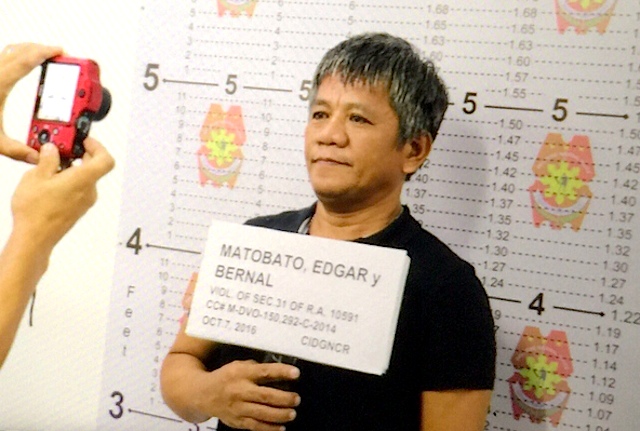 MANILA, Philippines – Citing alleged threats to his life in Davao City, the camp of self-confessed hitman Edgar Matobato on Monday, October 24, asked the Supreme Court to transfer from Davao to Manila the illegal possession of firearms case filed against him.

Matobato, who claims to have been a member of he so-called Davao Death Squad (DDS) that is linked President Rodrigo Duterte, was charged in 2014 for carrying a firearm without the corresponding permit-to-carry. The case is pending before a court in Davao City.

In September, during what was supposed to be a probe into the rise of killings attributed to President Duterte’s “war on drugs,” Matobato claimed that Duterte as Davao City mayor formed, fundedm, and headed the DDS. He said the vigilante group targeted suspected criminals and even Duterte's political and personal foes.

Matobato, a former Davao City hall employee, has named former and current Davao police officers and other personalities who were supposed part of the vigilante group.

In the petition for transfer of venue, Matobato’s lawyer Jude Josue Sabio said that these people might want Matobato killed.

“The fact that President Rodrigo R. Duterte is the prime target of his [Matobato’s] expose makes the scenario even more terrifying. This is not to mention the fact that Matobato’s former comrades are policemen based in Davao City who are capable of mounting an attack on him in a covert manner,” read the 16-page petition filed with the High Court.

Matobato is under the protective custody of Senator Antonio Trillanes IV, who is among Duterte’s critics in Congress. It was Trillanes who accompanied Matobato when the latter surrendered in Camp Crame earlier in October.

An arrest warrant had been issued by the Davao court after Matobato failed to appear during his arraignment. He was in Manila at the time, waiting for his turn to again testify before the Senate. Within a week, Matobato posted bail before a Quezon City court.

His next arraignment is scheduled on November 3. Matobato’s lawyers also asked the Office of the Court Administrator to cancel his arraignment, pending his petition to transfer the venue of his case. – Rappler.com