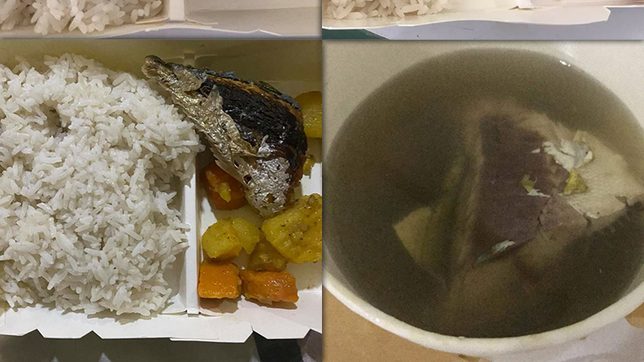 The photos, posted by Chay Sandoval on Facebook, show the kind of meals being rationed to people in Cagayan de Oro's quarantine facilities. The meals don't look like they would cost P80 each.

Cagayan de Oro Mayor Oscar Moreno on Tuesday, May 18, apologized for the kind of meals being rationed in city hall’s COVID-19 facilities.

The apology was made during an online press conference on the COVID-19 situation, a day after the woman took to social media to complain about what she said were deplorable meals served in her last nine days in a local isolation facility.

Chay Sandoval said all she wanted was for city hall to allow her relatives and friends to send her freshly cooked food because the meals from city hall were unacceptable to her.

Sandoval ranted on Facebook and posted photographs of the food being delivered to her isolation room. She said the food were either salty or smelled and tasted fishy, and not freshly cooked.

Moreno, visibly irked, did not take the criticism lightly, but held back. “Pasaylo-a mi kung mao ra na ang among ma-afford,” he said. (Forgive us if that’s the only kind of food we can afford.)

But Moreno stood firm in city hall’s policy to disallow anyone from sending meals to the quarantine facilities due to risks of contracting more COVID-19 infections.

He said city hall has been spending as much as P8 million a month to feed people in the quarantine facilities, and workers in city hall’s kitchen have been making sacrifices.

The budget, Moreno said, amounts to less than P100 per meal for each person.

“Our kitchen workers start preparations as early as 2 am daily,” Moreno said.

City hall spokesperson Maricel Rivera said city hall spends an average of P80 each per meal for about 1,000 people in the isolation facilities. Aside from patients, these number included frontline health workers and volunteers involved in the vaccination rollout.

But the number of people being fed by city hall daily has increased to about 1,500, owing to the surge in COVID-19 cases in recent weeks, Rivera said.

At P8 million a month, this translated to some P380 daily food allocation for each person during the 14-day average quarantine period. The photos of the food posted by Sandoval, however, raise serious questions on the meal costs.

Sandoval said she and others in the quarantine facilities were not demanding more funds for better meals.

She wrote an appeal to city hall on her Facebook page, “Unta tugutan ninyu nga mahatdan mi ug makakaon mig insaktu para mabalik ang kusog ug kapiskay sa amung panglawas… Ganahan ba mo mokaon aning mga pagka-ona?” (We hope you would allow food deliveries so that we could eat properly and regain our strength… Can you eat the kind of food you have been giving us?) – Rappler.com