Long encouraged to apply as a justice of the Supreme Court, Justice Secretary Menardo Guevarra has passed up on what could be his last chance.

Guevarra confirmed he did not apply for the vacancy of retired justice Edgardo delos Santos, which closed for applications last July 15.

“The Judicial and Bar Council (JBC) deadline was not extended. I did not apply,” Guevarra told reporters.

Because of a new JBC rule on age limit, Guevarra, who is currently 67 years old, would be two months older than the limit for the next vacancy in January 2021, when Justice Rosmari Carandang retires.

Unless another justice retires earlier than scheduled, or the JBC rule is revoked, the Supreme Court is a closed chapter for the justice secretary, who said last year that he was still “keeping the flame of my flickering hopes alive” to be a justice of the Court.

“I’ve said this before. Considering these critical times, I believe that I’ll be more useful to the government if I stayed on in the executive branch,” Guevarra said.

Guevarra has been quite the dissenter lately, contradicting President Rodrigo Duterte’s legal pronouncements concerning policies in the pandemic.

Guevarra said there were 11 applicants for the post of Delos Santos, two of whom are not from the judiciary. There are two open spots in the Bench, one for Delos Santos, and the other to replace the Associate Justice post of Chief Justice Alexander Gesmundo. Duterte already has the short list for the Gesmundo post, and they include Sandiganbayan Associate Justice Geraldine Faith Econg, ponente of the decisions that acquitted Senator Bong Revilla of graft and plunder.

Sandiganbayan Associate Justice Rafael Lagos, who concurred in the recent Revilla graft acquittal, was also shortlisted for the Gesmundo post. Lagos’ regular division handles the Jinggoy Estrada pork barrel scam cases, and in 2017, Lagos dissented to the decision that granted bail to the former senator. 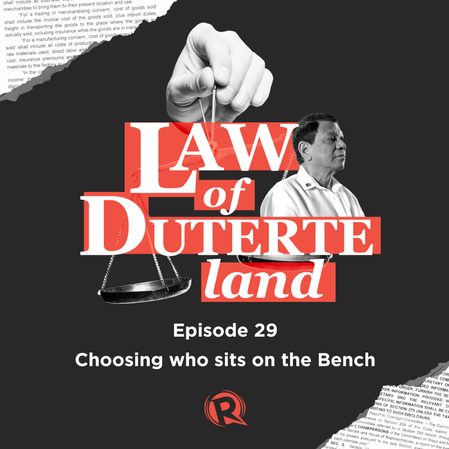