Metro Manila COVID-19 cases increase, but experts say not cause for alarm yet Facebook Twitter Copy URL
Copied
Because the virus' reproduction rate in NCR is still under one, Octa Research says lockdowns are not yet warranted

MANILA, Philippines – There has been a slight increase in the number of COVID-19 cases Metro Manila registering in the recent week, with 14 out of 17 cities in the capital region showing increases in both infections and positivity rates, health officials said.

Health Undersecretary Maria Rosario Vergeire told reporters in a press briefing on Monday, December 27, that cases in the capital region grew by some 49% in the last week, although it remained at “minimal risk” of COVID-19 for now.

“In the National Capital Region (NCR), the daily cases in the recent week showed an increase of 38 [cases] or 49% cases from the previous week, now averaging 115 cases per day,” Vergeire said.

Data gathered as of Sunday, December 26, also showed that, of the eight areas the Department of Health (DOH) was flagging for both positive one-week and two-week growth rates, five were from Metro Manila. They included the following:

In addition, of 31 other highly urbanized cities and independent component cities showing positive one-week growth rates in cases, but not yet two weeks, eight or 26% were in the National Capital Region.

These areas currently had less than 100 active cases, Vergeire said, but “we (DOH) are flagging these areas so that these increases can be immediately controlled.”

A key metric used by the government to determine the spread of COVID-19 infections – the the reproduction number – has also doubled in Metro Manila, but an experts group monitoring the pandemic says the figure is not alarming enough to warrant tighter restrictions or lockdowns.

“We have to put it in context that the reproduction number is still less than one, so it’s not yet a big uptick in cases. The trend is not a solid trend upwards,” he added.

Based on DOH data, the ADAR in NCR was .69 per 100,000. Indicators also showed that, while the positivity rate across all regions remained to be less than 5%, an increase in positivity rate was observed in Metro Manila and Calabarzon.

The ADAR is the number of new cases in a city or province over a two-week period, divided by the population of the city or province. An ADAR that is less than one means that area is at low risk for COVID-19. Positivity rate is how many test samples against the total turn out positive.

While these indicators point to an uptick in cases, David said we were yet to see the full picture of these December transmissions because of reduced testing output over the holidays and due to Typhoon Odette (international name Rai). Some testing laboratories were closed over the Christmas break while many could not function because of the storm’s impact on their personnel or facilities.

Because of this, David said there was not enough data to warrant a new wave of restrictions or lockdowns.

“There’s no need to increase restrictions at this time because it could just be a holiday uptick, which means, after the holidays, the number of cases could go down. Right now, we can’t make premature interventions because the picture is not yet complete,” said David.

But he said the increase in reproduction number is a “good reminder” to the public to observe protocols, like consistent mask wearing, social distancing, and ensuring good ventilation when going out or meeting other people. David cited anecdotal evidence of “complacency” among Filipinos, where some would test positive after attending Christmas parties or reunions.

COVID-19 holiday plans: What would experts do? Can’t say Omicron is a factor yet

The slight uptick in reproduction number comes as the government announced the fourth case of the Omicron variant in the Philippines. Like the first three, the infected person came from overseas travel. This means no local transmission of the variant has been detected in the country.

But, as it prepares for the eventual entry of the variant, Vergeire said the DOH was looking to minimize the impact of Omicron in the country by further ramping up vaccinations among the elderly and high-risk population, who were observed to have the highest likelihood of hospitalization and death.

Aside from this, Vergeire urged local governments to step up immediate case detection, isolation, and contact tracing to help slow transmission.

COVID-19 Weekly Watch: Where the pandemic will take us in 2022 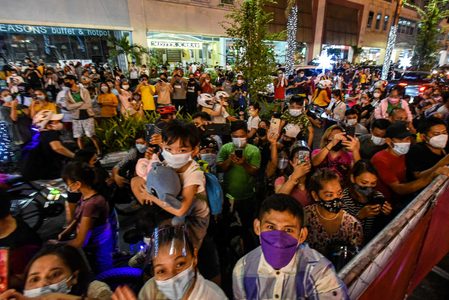 David also said it was possible that the increase in reproduction number was only due to increased activity during the Christmas holiday.

“If we compare it to the 2020 holiday season, December, we also had a holiday uptick so we can’t say it’s Omicron-driven because we also saw it last year,” he said.

Octa Research observed the rise in cases last year before December. This year, the increase was seen during the holiday season itself.

There are currently over 9,300 active COVID-19 cases in the Philippines. Metro Manila has been classified to have “minimal risk” for COVID-19 since early December, prompting an easing of restrictions that have allowed residents to hit the cinemas, hold some limited social gatherings, and let their kids step into malls for the first time in nearly two years. – Rappler.com