QUEUE. People await their turn to board the EDSA Carousel Bus at the Kamuning Bus Stop in Quezon City on September 13, 2021. 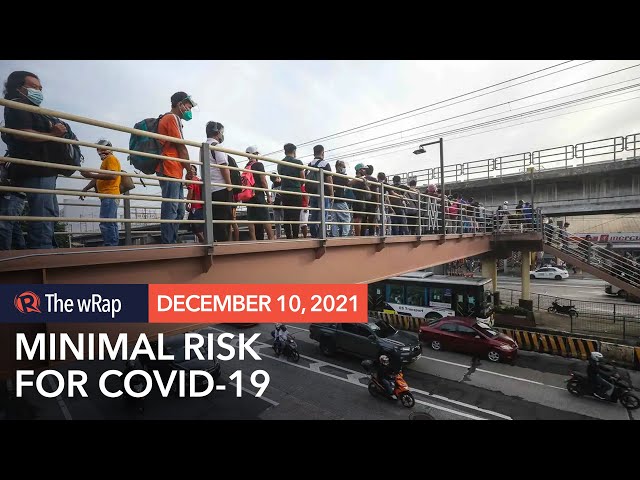 After nearly two years into the pandemic, virus epicenter Metro Manila is now at “minimal risk” for COVID-19, the Department of Health (DOH) said on Friday, December 10.

At a press briefing on Friday morning, Health Undersecretary Maria Rosario Vergeire said that the capital region has a negative two-week growth rate and average daily attack rate (ADAR) of 0.87 per 100,000 population.

An ADAR of less than one means that an area has minimal risk case classification. ADAR is the number of new cases in a city or province over a two-week period, divided by the population of the city or province.

In terms of hospital admissions, the Philippines’ total COVID-19 beds capacity is at low risk, with only 20% utilization. Compared to July, current dedicated beds are higher by 1,153 (3%) and admissions are lower by 8,671 (54%)

In July, the country was on alert for the threat of the COVID-19 Delta variant, which fueled a fresh surge in infections across the globe.

Despite the continued decrease in cases, the DOH reminded the public not to be complacent and to continue following minimum health protocols, especially now that a more transmissible variant of COVID-19 called Omicron has been spreading quickly in African and European countries.

Philippine health officials said on November 29 that it was “highly likely” that Omicron would eventually make its way into the country just as all other variants of concern. – Rappler.com