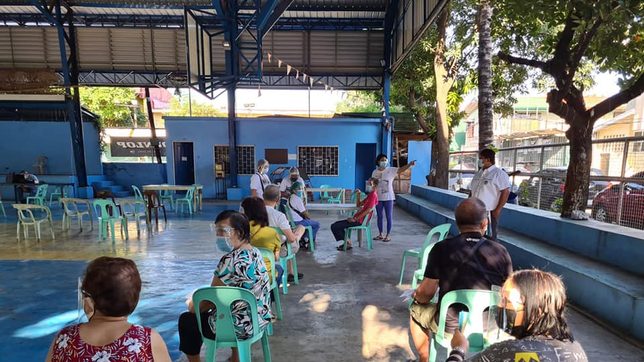 FINALLY. The City of Manila began inoculating its elderly population against COVID-19 on Sunday, March 28.

Some local government units in Metro Manila began this week the inoculation of senior citizens, who are the second priority among population groups after frontline health workers.

In Manila, nearly 4,000 senior citizens have received a vaccine dose from Astrazeneca since the rollout for the target group began Sunday, March 28.

The city hoped to vaccinate 200 elderly Filipinos within the day.

Caloocan and Pateros also kicked off the immunization drive for senior citizens on Monday, while San Juan City did so on Tuesday, March 30.

Quezon City (QC) meanwhile has yet to release a schedule of the vaccination of senior citizens.

Responding to Rappler’s query, the QC Public Affairs and Information Services Department said it is still finishing the inoculation of its healthcare workers.

“A2 (senior citizens) and A3 (persons with comorbidities) are next on the list. Remember we have a QCitizen ID registration, which makes it easier for us to contact senior citizens and persons with disabilities because we have a database already,” QC PAISD head Engelbert Apostol said in a mix of English and Filipino.

The city governments of Pasig and Makati said online pre-registration for the vaccination of the elderly population is ongoing.

Under Resolution No. 106 by the Inter-Agency Task Force (IATF) on Emerging Infectious Diseases, the national government allowed the implementation of simultaneous vaccination of Priority Group A1 (health care workers), A2, and A3 to maximize the speed of the National COVID-19 Vaccination Program. – Rappler.com