INOCULATIONS. Marikina residents receive their first dose of the Pfizer COVID-19 vaccine at the Marikina Sports Arena during the city's initial rollout on May 20, 2021.

Facebook Twitter Copy URL
Copied
Navotas Mayor Toby Tiangco, however, disagrees with the order, saying it will only further discourage people from getting vaccinated

At least six local government units (LGUs) in virus epicenter Metro Manila said on Thursday, May 20, that they will adhere to the national government’s order for LGUs to only disclose the brand of COVID-19 vaccine to recipients once they are already in the inoculation site.

The Department of the Interior and Local Government (DILG) on Thursday ordered LGUs not to announce in advance the vaccine brand that will be offered in inoculation centers to prevent the influx of people who want to be administered with a particular brand of vaccine.

Quezon City Mayor Joy Belmonte said she will back the DILG order which is also known as the “brand agnostic” vaccine policy.

“Every vaccine is effective, every vaccine is safe,” she said during the signing of memorandum of agreement with ACT-CIS on providing additional medical teams in vaccination sites.

“What is important is that the vaccines are approved by the Food and Drug Administration and have emergency use authorization – thus, are safe and effective,” he said in a text message to reporters.

Pasay City Mayor Emi Calixto-Rubiano said she believes the public’s preference for some vaccine brands is hampering the LGU’s efforts to roll out the jabs faster.

(People waiting for a vaccine is the reason why the rollout has been slow. If this continues, it would take us longer to achieve herd immunity.)

The Muntinlupa LGU said it changed its announcement templates on social media in accordance with the DILG order.

The Manila PIO told reporters in a Viber group that it will also comply with the national government’s directive.

This comes after hundreds of people flocked to an inoculation site in Manila on Tuesday, May 18, once they found out it was offering Pfizer COVID-19 vaccines.

Only 900 shots were available that day, so people who missed the cut took to social media to express their disappointment. 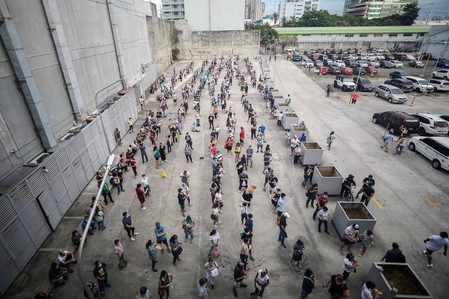 Hundreds of “enthusiastic” senior citizens also trooped to a vaccination site offering Pfizer shots in Parañaque on Monday, May 17, according to reports.

The Malabon PIO said the city government is adhering to the national government’s policy to avoid such incidents.

While many LGUs in Metro Manila are supportive of the DILG policy, Navotas Mayor Toby Tiangco said on Thursday he was opposed to the new order.

He argued that it would only further discourage people from getting vaccinated since they do not know what vaccine they will be getting before they arrive at the vaccination site.

“Number one, it will create distrust. Number two, there is no such thing as a secret, vaccines have to be prepared, so for sure information will be leaked,” he told Rappler.

“Number three, vaccination is purely voluntary and cannot be forced upon a person. It is the right of the person to know what vaccine will be administered [in advance],” he added.

Tiangco said he will formally ask the national government to reconsider once a written order reaches his city government.

“If this was not a problem in Navotas, then there is nothing to solve here. We would be creating a bigger problem than the problem we want to solve,” he added.

The Department of Health has emphasized that the public will be informed about the type of shot that will be offered to them once they are in vaccination sites.

DOH says vaccine brand, information to be given on-site Increasing the public’s confidence in vaccines remains a challenge in the Philippines. A Pulse Asia survey released in March revealed that 61% of Filipinos do not want to be inoculated with a COVID-19 vaccine.

As of Tuesday, 2.5 million Filipinos have received their first dose of the COVID-19 vaccine. — Rappler.com